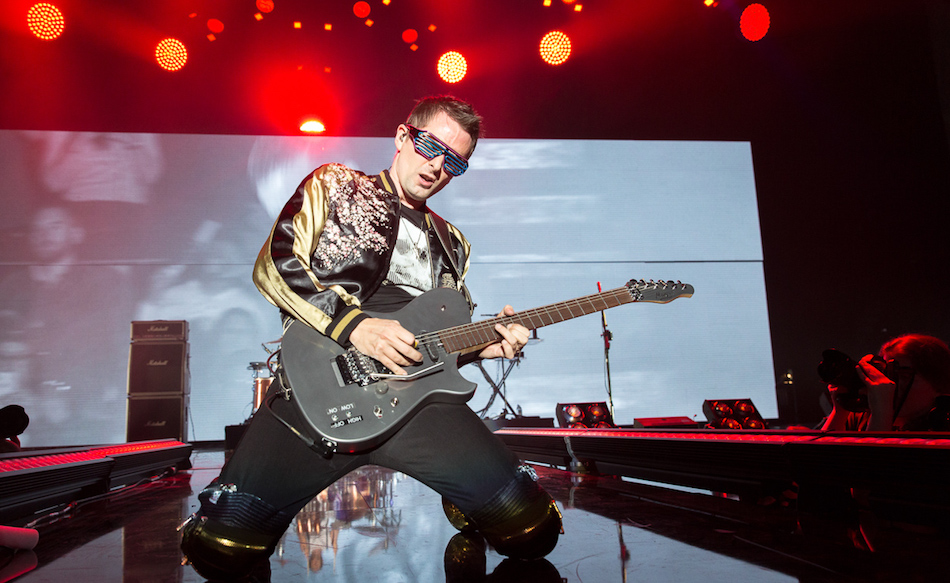 On the first night of KROQ’s Almost Acoustic Christmas, bands that were woke and spoke out politically were heard the loudest. Prophets Against Rage spoke backstage about how they were a band for the poor and disenfranchised; Run The Jewels warned fans to ‘keep their hands off the ladies’; and Rise Against proclaimed, “It’s OK to say, ‘Fuck racism and homophobia in 2017.’”

KROQ’s annual Christmas party was held at The Forum, in Los Angeles, on Dec. 9 and 10, and attended by about 24,000 people over the two nights. These socially conscious bands with already impressive musical outputs tapped into the current zeitgeist and at each turn their comments were met with enthusiastic cheers and raised fists. They set the tone early and by time Saturday’s much-anticipated headliners Muse took to the stage, they could leave their dystopian music to do the talking.

On the second night, The Killers, back on tour with Wonderful Wonderful, touted by critics as their best album since Hot Fuss, gave the people what they wanted: all the hits and more.

Despite an absence of female acts, two queens made the headlines. Queens of the Stone Age’s Josh Homme kicked a photographer on the first night and His Royal Highness himself, Morrissey, cancelled his headlining set on the second night.

Apart from The Lumineers’ cellist/vocalist Neyla Pekarek, Cold War Kids brought the only other girl to the party when they invited Bishop Briggs on stage for their latest collaboration “So Tied Up” and a cover of Rihanna’s “Love on the Brain.” It’s a wonder why Briggs—the only female act on the bill last year, whose profile has grown enormously, opening for Coldplay this year—was not on 2017’s official bill. Even so, Los Angeles has a strong posse of outstanding female-led bands that we keep holding out for at every KROQ Christmas.

Being a Christmas radio show, it’s bands with the radio-friendly hits promoting new albums that usually get invited. French electro-poppers Phoenix, on the road with their latest Ti Amo, delivered a crowd-pleasing set (though from where I sat, they sounded muffled) that included “J Boy,” “Lisztomania” and “1901.” “Take Me Out” art-rockers Franz Ferdinand dazzled with new tracks of Always Ascending.

Walk The Moon got everyone dancing for “Shut Up and Dance” and “Anna Sun.” Foster the People did the same with “Pumped Up Kicks” and their Ramones cover of “Blitzkrieg Bop.”

The cult of Jared Leto led the festivities for Thirty Seconds to Mars. The Lumineers delivered a different pace with their banjo-folk on the rousing “Ho Hey” and an earnest Tom Petty cover. But here are our Top 5 bands that played entire sets full of non-stop favorites. 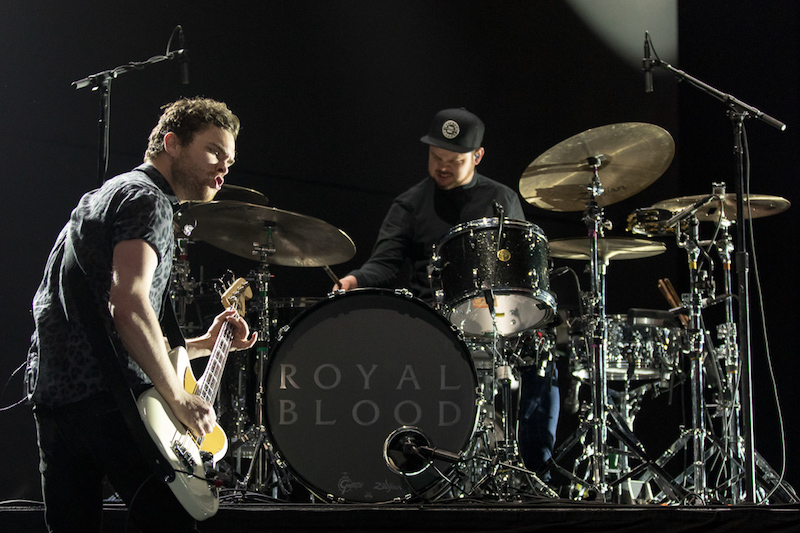 Kicking off with one of the most exciting rock duos since The White Stripes seemed insane. Royal Blood only got to play five songs and it wasn’t to a capacity crowd. But it was by far one of the biggest audiences we’ve seen for a KROQ opener.

Fittingly, they started their set with “Out of the Black.” It’s the first single Brighton vocalist/bassist Mike Kerr, and drummer Ben Thatcher released as Royal Blood in 2013. Thatcher’s forceful machine gun-tight drumming gave way to Kerr’s slow drawl and by the time they hit their monster riff of a chorus, folks were head-banging like they were the headliners.

Little wonder Royal Blood’s 2014 debut was one of the fastest selling in the U.K. and they’ve repeated their success with How Did We Get So Dark, their sophomore effort which went straight to No. 1 in June.

They launched into new single “I Only Lie When I Love You” next, with Kerr dressed in a black faded leopard-print shirt, button-down like the rock star he’s quickly grown into. They kept the pace frantic and constant, closing on a high with “Figure It Out.” 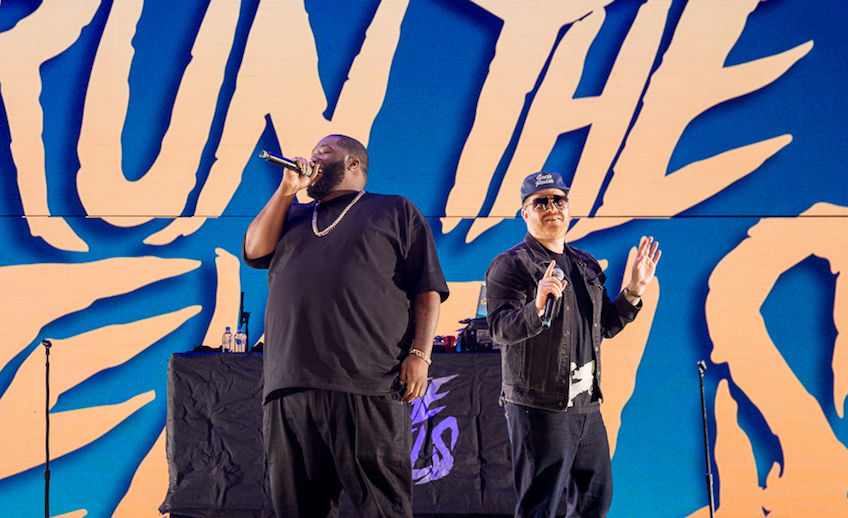 Another five-song set, duo Killer Mike and El-P stood out for bringing straight up rap and hip-hop to the KROQ Christmas stage, not a common occurrence, but it did mean more diversity and “color” than the average rock band. Notable was also the fact that they urged fans to look after and help pick each other up in the mosh pit, while El-P also preached looking out for the ladies. He warned: “We keep our hands to ourselves. That shit will get you locked out.”

With pointed songs like “Close Your Eyes” tackling Black Lives Matter and police brutality, and “A Christmas Fucking Miracle” highlighting the ills of those left behind in modern One Percent America, in song and thought they were great primers to Prophets of Rage who played immediately after. 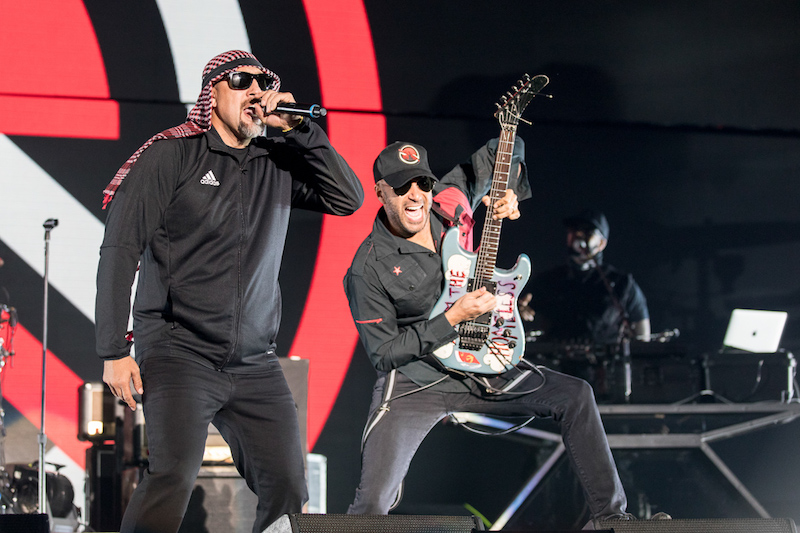 Members of Public Enemy, Cypress Hill and Rage Against the Machine came together during the lead-up to 2016’s Presidential elections, with the sole purpose of “confronting the injustices of our time” through hip-hop, rap and rock.

They were a welcome addition to the evening’s proceedings and easily the best set of the weekend. For one, the back catalogues of the three bands are staggering covering thirty years of popular music that will always be relevant for their urgent themes.

Their set began with the gravitas of Public Enemy’s “Prophets of Rage” Chuck D’s deep, wizened vocals and DJ Lord’s exquisite old-school scratch-work sounded like the cavalry had finally arrived.

“We’re a band who stand up for the working class, for the poor, for the underdog, the homeless; we stand up for the environment, for women’s rights, for LGBT—there’s two constants in the United States of America, one is injustice and the other is resistance,” Tom Morello had stated backstage, in an interview with KROQ DJ Nicole Alvarez.

A highlight in a short set of many was Cypress Hill’s “Insane in the Membrane” when rapper B-Real asked, “Are you feeling crazy,” then dropped the opening chords of the track which saw the 20,000-strong auditorium start to pogo to a collective swell.

Apart from older tracks, the band also did “All Hail to the Chief,” a new track with a deliciously menacing bassline by Timmy C, which saw B Real and Chuck D goose-step across the catwalk stage singing: “All hail to the chief/ Who came in the name /Of a thief/To cease peace.” They are not mincing words. “Dangerous times call for dangerous songs. And this is the most dangerous song of all,” declared Chuck D before “Killing In The Name” closed out their fantastic set. 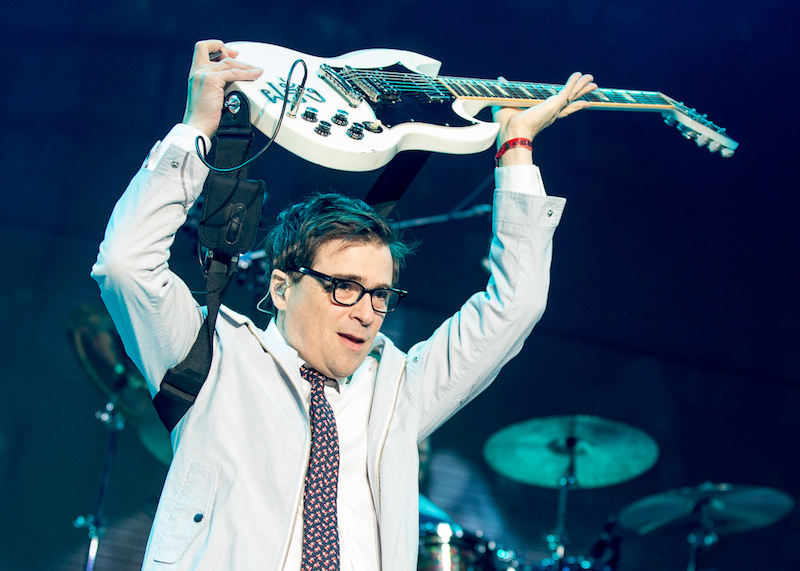 In contrast, Sunday’s affair was much tamer; the one band that mentioned politics in any tangent way were Denver folk-rockers The Lumineers, whose frontman muttered, “I didn’t vote for him,” in banter between songs.

Night two was just about the celebration. And Weezer, who are the perfect ambassadors of good cheer and have clearly become KROQ’s unofficial Christmas office party favorite were back for the fourth year running. Not that anyone was complaining because they provide the best sing-alongs with an avalanche of hit after hit: “Say It Ain’t So,” “Hash Pipe,” “Undone (The Sweater Song)” and “Beverly Hills.”

If Rivers Cuomo was ill, you would not have guessed it from the energy of their 60-minute set. But offstage, he stayed away from the rest of the band and was absent from the live KROQ interview backstage. Bless him for saving it for the fans.

Their Pixies cover of “Where Is My Mind,” which Cuomo said was in anticipation for their double-bill tour with the legendary band next year, was a perfect tribute to a band that has inspired Weezer from the beginning. They closed out with more euphoric communal sing-alongs on “Buddy Holly” and “Island In The Sun.” 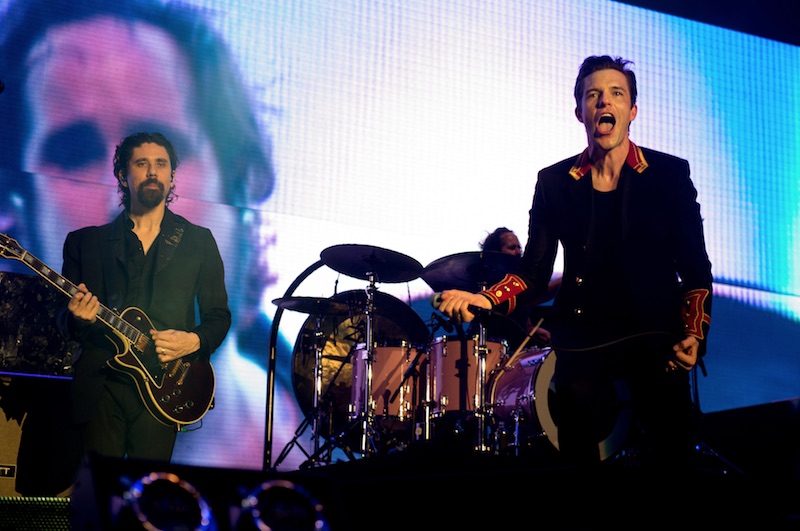 The Killers took their rightful place as closing headliners when Morrissey cancelled at the ninth hour. We should have known Moz was a no-show when the venue was serving sausages and bacon that afternoon; the Meat Is Murder champion of animals usually bans all meat products from venues the night he performs. Given his shoddy track record in recent years, any tickets to Morrissey is a crapshoot; diehard fans half expect it but it’s disappointing nonetheless.

Thankfully, Killers frontman Brandon Flowers, a huge Morrissey and The Smiths fan, gifted us with not one but two covers in “This Charming Band” and “Everyday Is Like Sunday.” When he sang, “This man said, ‘It's gruesome / That someone so handsome should care,’" with the knowing, gleeful charm of a dandy, you just had to swoon.

Flowers had first come out swinging with “The Man” the anthemic electro-pop single of their latest Wonderful Wonderful. He put his slick Las Vegas showmanship to good use in fleshing out the ironic bravado in the song’s theme but he’s such a handsome devil, the irony would have been lost if not for his thespian resolve.

Wonderful Wonderful, their fifth album in 13 years, is also their first ever Billboard No. 1 album. It’s almost shocking to think with their bounty of radio-friendly singles, this is their first chart topper. Flowers pointed out recently that The Killers have also never won a Grammy or been on the cover of Rolling Stone.

There is no denying that we miss Flowers being flanked by guitarist Dave Keuning with his Brian May-hair, power chords and killer riffs, as well as bassist Mark Stoermer.  However, as Flowers delivered flawlessly on career-spanning hits like “Runaways,” “Read My Mind,” “All These Things That I Have Done,” “When You Were Young” and of course, the one that launched it all, “Mr Brightside,” to a delirious arena of fans singing in unison, you remember it’s the season to just be grateful Flowers and drummer Ronnie Vannucci decided to not stay home.

See photos from throughout KROQ Almost Acoustic Christmas 2017 below.