PRiiCE shares centerpiece track 'Kingsize' ahead of their debut EP

Magic Whatever & Lauren Sanderson team for riveting single 'Save This City'

Toronto's Once A Tree embraces 'The Good, The Bad' with new EP

The Light The Heat's 'Afterlight' EP is perfect for this moment

Johan Lenox starts next chapter with new single 'You Up?'

VHS Collection has us spellbound with 'Space Between Us'

LAIKIPIA transports us to another dimension with new album

Not everything from Florida is bad, as seeyousoon proves with their incredible album 'HZLIKEHELL'

More Than 50 Killed in Mass Shooting at Las Vegas Festival 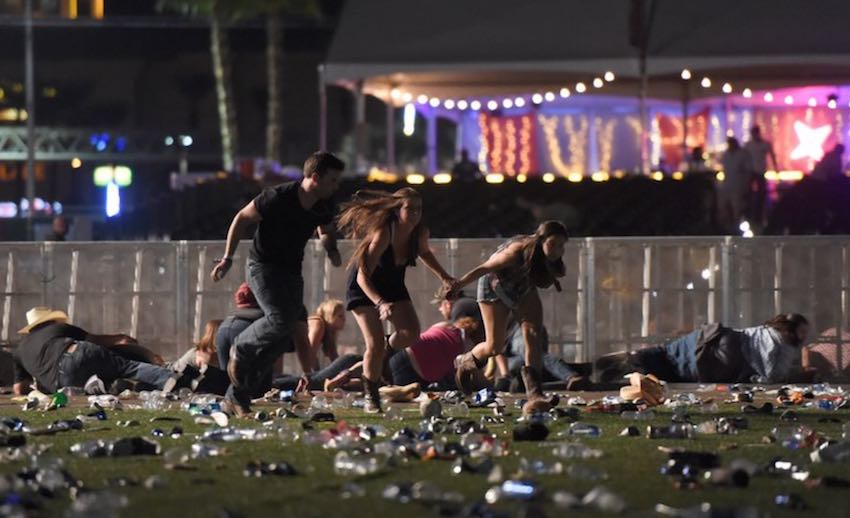 Police in Las Vegas said at least one gunman opened fire late Sunday night around Mandalay Bay Resort and Casino, killing more than 50 and injuring at least 527 others, making it the deadliest shooting in U.S. history.

Reports came in late Sunday night of multiple injuries. It wasn't immediately clear if there was more than one shooter. The incident occurred near the Route 91 Harvest country music festival on the Vegas Strip. According to witnesses, Jason Aldean was performing his headlining set when gunfire began.

Las Vegas Police immediately shut down part of the strip as authorities pursued an "active shooter." A live feed of the local police scanner indicated officials were responding to reported shots in multiple locations, including the nearby Tropicana Hotel and Casino.

According to Michelle Velez of local NBC affiliate KSNV, an attendee captured footage from the festival which includes several rounds of shots and audible screams as the crowd panics. The video can be seen below.

KSNV's Kelsey Thomas reported just before 11:30 p.m. PST one suspect had died from a gunshot wound, citing the police scanner. Local TV station KTNV has reported as many as 70 victims have been taken to nearby hospitals.

At 11:45 p.m. PST, McCarran Airport confirmed all flights—inbound and outbound—have been halted due to this ongoing situation.

As of 12 a.m. PST, the Associated Press reported, per one nearby hospital, there were at least two people dead, 24 injured, 12 of which were in critical condition.

Around 12:10 a.m. PST, police were reporting "suspicious activity" around Luxor Hotel and Casino. Police have advised all to stay away.

At 12:30 a.m. PST, Las Vegas Police said they do not believe there are any more active shooters.

At about 12:50 a.m. PST, McCarran Airport resumed "limited flight activity," but cautioned passengers to continue monitoring the status of individual flights with the respective airline. "Expect on going delays," they said.

Update: Authorities have updated the death toll to 58 killed, while at least 527 others were injured. According to Las Vegas Metropolitan Police Sheriff Joseph Lombardo, the gunman, 64-year-old Stephen Paddock, fired a slew of bullets from the 32nd floor of the Mandalay Bay Hotel. The motive was not immediately clear and authorities believed Paddock killed himself in his hotel room before officers arrived.

Note: While the video footage below is not explicitly graphic, some may find it to be disturbing.

Video courtesy of Drew Akioshi. He was attending the concert at mandalay bay when shooting started. pic.twitter.com/mbyh9Y387q

Please avoid heading to the south end of the Strip. Las Vegas Blvd is shut down at Tropicana, southbound past Russell Rd at this time.

UPDATE: Flights in and out of @LASairport have been temporarily halted in response to reported shooting incident on Las Vegas Strip.

@News3LV found this from a friend on IG. So scary. My heart is breaking. 💔 pic.twitter.com/OWiqmFwfiG

Confirming that one suspect is down. This is an active investigation. Again, please do not head down to the Strip at this time.

A dozen @LVMPD cops cats racing to area near Luxor property. There's a report of a suspicious device that looks "very bad" says one cop. pic.twitter.com/99TlJx2wdH

At this time we do not believe there are any more shooters. More information to come shortly from @Sheriff_LVMPD.