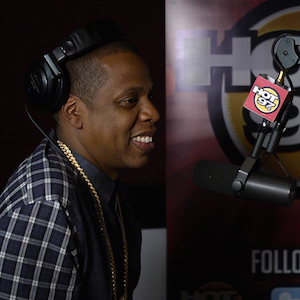 Following a record day of tweeting, JAY Z stopped by Hot 97 radio on Tuesday to talk to Angie Martinez. The interview was, in many ways, a second half to his impromptu Twitter Q&A the day before, even allowing him to expand on some of his previous 140-character comments. Continuing with recent candidness, the rapper and businessman opened up about a wide ranging list of topics, from wife Beyoncé's new music to high praise for Miley Cyrus, in addition to some love for Kanye West's new album Yeezus.

Hov revealed that he and Beyoncé dance in their socks at home to her new music, of which there are “a hundred thousand amazing songs”—give or take a few, of course.

He also showered praise on Miley Cyrus and her new chapter in music, Kanye West's "polarizing" new record and even his ex-partner Damon Dash, who was reportedly slapped with another massive tax lien.

Here are some highlights:

On fatherhood: “It’s more reaffirming. The things that’s really important in life and editing your life in such a way that you don’t have anything that’s distracting you, anything that takes away from that time you can be with your child.”

On Beyoncé’s new music: “Right now, B has a hundred thousand amazing songs." He notes that "when she's ready," they'll be released.

On Miley Cyrus: “Miley’s serious. I like what she’s doing right now. She’s fearless. I think it’s more a reaction to people wanting her to be Hannah Montana. Just watching the situation, people want her to be something and she’s like, ‘I’m not that. I was six years old. You want me to be six years old forever?’ And this is her reaction to it. Maybe it’s loud, but it’s understandable.” He went on to note that "there's room on the roster" when asked about the possibility of Roc Nation managing Cyrus.

On Yeezus: “I love it. It’s polarizing because it’s art. That’s what art is. It forces you to have an opinion … He’s fearless.”

On advising Rihanna: “I give information when asked and then you let everyone make their own decision. I can’t control the outcome of her life, I can’t intervene. I can give advice if asked.”

On ex-partner Dame Dash: “No matter how many years I ain’t see him, the love is still there because what we’ve done will forever be stamped in history. … I have ultimate confidence in him that he’ll find his way because he’s an amazing and really smart guy. He’s a hustler and he’s highly intelligent. I always root for him and always believe that he’ll find his way out of it.”

On what he’s listening to at the moment: “There’s no room in the [CD] changer. There’s Wale, J. Cole, Yeezus and Hova.”

On reading the blogs: “Not that much, but once in a while, yeah. More music though, just music. Not like we worried about gossip. It’s not my business.”

Listen to the full interview here.