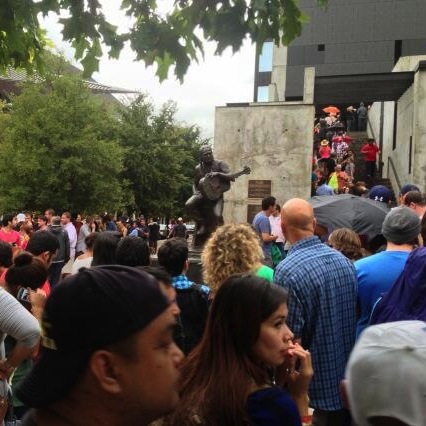 After the final day of Austin City Limits Festival's second weekend was scrapped due to storms and flash flood warnings, several of the bands slated to perform Sunday announced impromptu make-up shows throughout downtown Austin.

Refunds are being issued at the point of purchase. For details, go here.

Below are some of the known shows (all times Central Standard):

Atoms for Peace - Performing at ACL Live (Moody Theater), $10 tickets go on sale at 6 p.m. Must be present to receive a wristband for the show. As of this writing, venue expected to hit capacity with those already in line. [Update: According to Thom Yorke, live stream will be available starting at 10 p.m. Check this space later.]

Franz Ferdinand - Reportedly playing show at 7 p.m. at the Infest (213 W 5th St). Line in progress as of this writing. (Confirmed by lead singer Alex Kapranos)

GROUPLOVE - With Small Pools and The Mowgli's at Lamberts, starting at 9 p.m.

The Mowgli's - Two shows, including free show at Lambert's tonight at 9 p.m.

Red Baraat & The Lone Bellow - Free show at the Belmont tonight at 8 p.m.

ATOMS FOR PEACE AT ACL LIVE [STREAMING BELOW]: