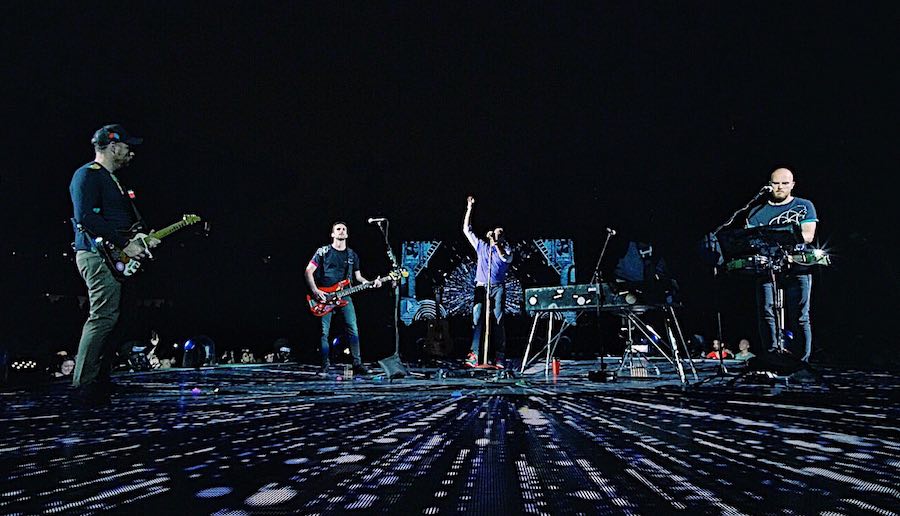 "One day when I’m 100 years old, I want to say to my grandchildren that Chicago on August 17, 2017, was the best crowd we ever played for," proclaimed Coldplay’s Chris Martin just moments into Thursday’s return to Solider Field following two soggy sell-outs last summer. "We’re gonna give it everything we got. Let’s go!"

And with that, it was off to the races as the new biggest band in the land (sorry, U2) tore through selections from its brand new EP Kaleidoscope, the previous radio-ready long player A Head Full Of Dreams, and all the way back through the Brit pop outfit's 2000 debut Parachutes. Whether it was that middle collection’s title track backed by a tremendous fireworks display, pre-distributed wristbands synchronized to match the palette of “Yellow” or the American flag that flanked “Every Teardrop Is A Waterfall,” Coldplay turned in a sumptuous visual spectacle during practically every second of the two-hour extravaganza.

But the rainbow of colors, lasers, streamers and screens that seasoned a massive catalogue of smash singles was also accompanied by a life-affirming tone that championed unity and applauded diversity. Sure, Coldplay could’ve easily called out any one of the ongoing issues causing so much cultural divide, but instead, dedicated its energy to nothing but positivity, or in the case of one concertgoers’ apropos sign that frequently flashed above the group: “A Head Full Of Dreams For World Peace.” 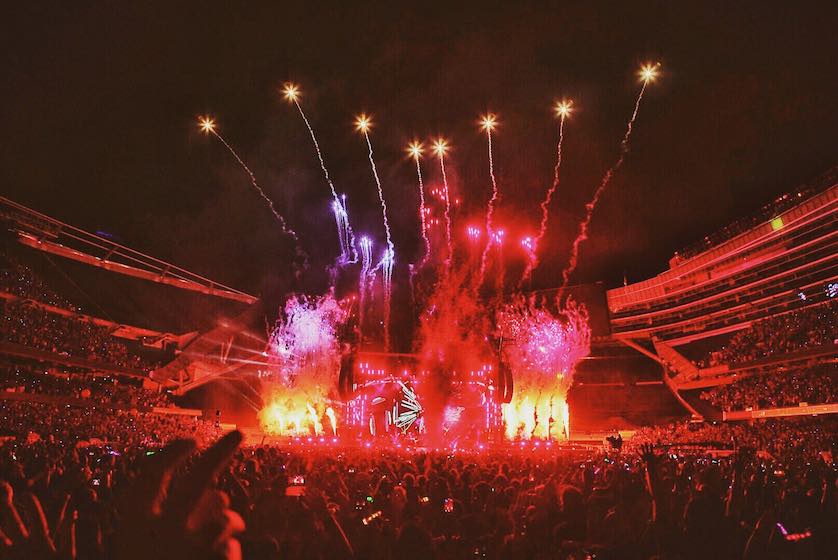 Prior to the stripped down “Everglow” (performed at the end of a giant runway), the likeable leader namechecked several of the territories entrenched in episodes of civil unrest and asked everyone to send an immense amount of love their way. That mood was certainly contagious, even in less weighty contexts such as the piano spiking “Clocks,” which may have quite possibly beat out “Paradise” as the most epic moment from the front half (and that latter track was beefed up with an electronic outro, a random fan wearing an elephant costume and Martin’s endearingly nerdy dancing).

However, it turned out Coldplay was only getting started, livening the mood all the more with the flame-adorned “Hymn For The Weekend,” the chilling chant-along “Viva La Vida” and the beach ball bounce-around “Adventure Of A Lifetime.” This year’s concert also made up for 2016’s slightly abbreviated opening set at the hands of a severe weather evacuation, incorporating an acoustic segment at the back of the stadium that dug into the annals for the audience request “Us Against The World” (which is reportedly being considered for a future live collection).

Martin made sure to mention, "Some of you may have come last year and were soaked,” after which he and the entire band pumped extra steroids into the EDM-laced finale, perhaps as an attempt to make up for the lost time. And whether it was The Chainsmokers’ collaboration “Something Just Like This,” “A Sky Full Of Stars” or “Up&Up,” Coldplay more than lived up to its reputation as today’s leading stadium act, while giving 65,000 of its supporters a serious jolt of joy and a much-needed golden rule reminder as they went back to face the harsh realities of a society desperately needing something on which to agree. ■