Who Should Perform at Hillary Clinton's Inauguration? 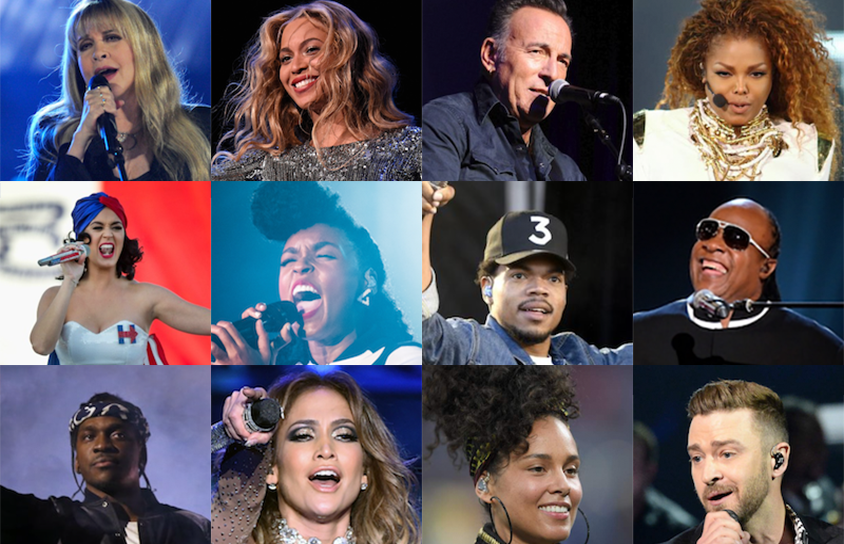 Wednesday was Hillary Clinton's 69th birthday and for she's been leading most of the national polls by healthy margins with just 12 whole days remaining before Election Day (Nov. 8).

While Donald Trump could certainly pull out a miraculous win and he continues to insist the polls are wrong and the election is rigged, RealClearPolitics shows the reality television star has been creeping downward in polls since late September. And although the alleged billionaire surprised many pundits during the primaries, polls had accurately showed him leading the diluted Republican field. Those polls were right all along, but many gurus ignored them.

Based on the latest forecasts from election analyst Nate Silver's FiveThirtyEight, once-dutifully conservative states such as Georgia, Utah and Arizona are now "swing states," with the latter actually trending in Clinton's favor, after having only voted for a Democrat once in the last 15 presidential elections (in 1996 for Bill Clinton).

Assuming the numbers hold, Hillary Clinton has an 84 percent chance of reaching the 270 electoral votes necessary to clinch the White House, thus making her the 45th—and first female—president of the United States.

Given the historic nature of such a victory, there will likely be plenty of options available for inaugural celebration performers. But we've come up with just a few suggestions. (Note: There are typically multiple festivities held the week of the inauguration, although only a few music acts usually perform for the swearing-in ceremony.)

Stevie Nicks
She performed at Bill Clinton's inauguration in 1993 and she said last month she'd like to perform an all-star version of "Landslide" for Hillary's. Especially if she does win by more than a couple of percentage points, it may be fitting. Imagine Stevie surrounded by Billy Corgan, the Dixie Chicks, Miley Cyrus, Lady Antebellum and others who have previously covered the Fleetwood Mac song.

Katy Perry
The "Roar" singer was one of Clinton's earliest supporters and has performed numerous times at rallies and at the Democratic National Convention. It's possible the two have already discussed post-election activities, but if not, Perry will quite possibly be at the front of the line.

Janet Jackson
In addition to being a pioneer for females in her own right, her song "Nasty" got a big boost in plays after Trump referred to Clinton as a "nasty woman." Might as well just bring it full circle. 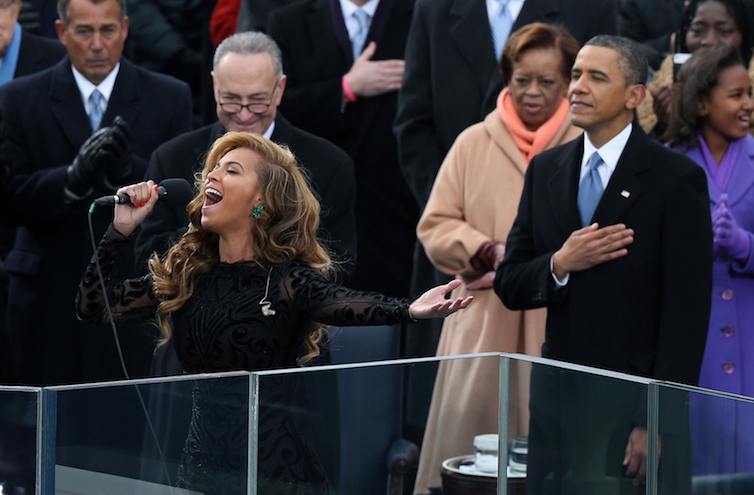 Beyoncé
She's arguably one the biggest stars on the planet, female or otherwise. Sure, she hasn't been as vocal in her support of Clinton as she was for President Obama, but her husband JAY Z is performing a get-out-the-vote show for the Secretary. And it could be a nice way to encourage antsy Obama supporters not to count Clinton out before she's even started.

Lady Gaga
White she's already set to perform at the Super Bowl just weeks after the Jan. 20 inauguration, Gaga knows a thing or two about shattering glass ceilings. And considering she performed during the Democratic National Convention, she's clearly already on the bench waiting.

Janelle Monáe
The singer-actress has been very much Team Obama, but she's also endorsed Clinton. Considering her role in the upcoming Oscar-buzzworthy film Hidden Figures (about women breaking barriers in NASA) and how underrated of a performer she's been, the timing couldn't be better.

John Legend
Not only has the singer been artfully critical of Donald Trump, but he can kind of do no wrong. Does John Legend have enemies? Is Fox News airing segments bashing John Legend? Allow him to aid in the country's post-election healing.

Pusha T
As president of G.O.O.D. Music, he has experience in the chief executive role. And considering Hillary Clinton has awkwardly utilized his support in her efforts to attract millennials and black voters, it's only fair he be allowed to relish in her victory and remind baby boomers they hitched their wagon to the wrong candidate.

Jennifer Lopez
If Clinton wins, it will be thanks in large part to a surge in female support as well as the growing Hispanic electorate. That's likely why Lopez is performing in Miami this weekend to boost turnout. But one of the next President's challenges will be in addressing the Latino community. It would be great to see Hispanics represented on Inauguration Day. Gloria Estefan, Shakira, Enrique Iglesias, just not Pitbull, who is bad. 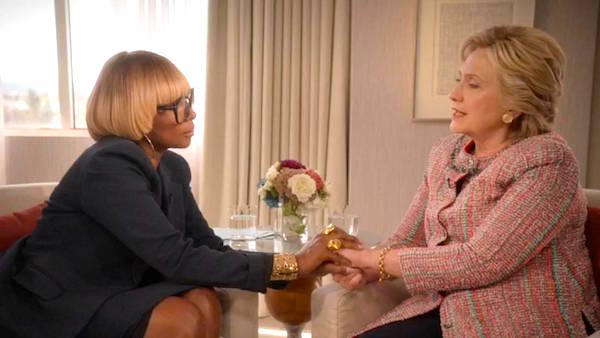 Mary J. Blige
Not only is she one of the greatest of all time, but she endured that painful, confusing Apple Music interview in which she discussed police brutality with Clinton and then sang to her about racial injustice.

Alicia Keys
After such a contentious election, Alicia Keys is perhaps one of the least polarizing singers. And her performance of "Superwoman" at the Democratic National Convention could be a nice preview of a Clinton inauguration. Her unifying single "In Common" (a nice theme to invoke post-Nov. 8) also has a remix from Kanye West and Travis Scott, if we're considering guest appearances to really get the youths excited.

Bon Iver
This election has been a last stand of sorts for older white males, who have skewed overwhelmingly for Donald Trump. Post-election, many white voters may be feeling demoralized—that is, if they're not out causing "civil disobedience" with their "pitchforks and torches." Hillary Clinton will need to bring the country together. And let's face it: white people love Bon Iver.

Justin Timberlake
If Bon Iver isn't available for some reason, we know Justin Timberlake does a great impression. And as another artist with rather universal appeal who almost faced legal issues over his recent voting booth selfie, maybe a cozy inauguration spot could make up for his troubles.

Chance the Rapper
The Chicago emcee has recently become a White House regular and he's developed a relationship with the Obamas, but he recently expressed support for Hillary Clinton, saying he feels a "certain connection" with her, perhaps opening up the possibility of many more D.C. visits.

Bruce Springsteen
Seriously. Can you get any more American than The Boss? "Born in the U.S.A."? And he just so happens to have been one of Trump's most vocal critics during the election.

Christina Aguilera
She's been publicly supportive of Clinton and she's due for a big performance like the inauguration of the first female president. Perhaps a star-studded collaboration, à la the 2011 Grammy Awards, when she linked up with Jennifer Hudson, Florence Welch, Yolanda Adams and Martina McBride for a tribute to Aretha Franklin, which was one of the most memorable Grammy performances of the past decade. How about we just bring them all, including Franklin, and just start the second Clinton era the right way.

Yolanda Adams
The Gospel singer has celebrated Clinton's historic candidacy, wishing her "God's best" after she secured the Democratic nomination. Not only did she perform in the aforementioned Aretha Franklin tribute, but she's in a unique position as a Christian leader. She and BeBe Winans are among very few Christian public figures supporting Clinton, because evangelicals insist that no matter how horrendous the nominee, the Republican party is somehow the Christian party. And post-November, it's likely Christians will only dig their heels in further. Thus, it's even more important for leaders like Adams, Winans and any other like-minded musicians to be seen and heard, to help unite the nation and perhaps to remind fellow believers that everything will be alright.

Stevie Wonder
While many A-list musicians have long been associated with the Democratic party, some such as Stevie Wonder manage to avoid muddling their professional image with their political leanings. And in this intense election climate, there are surely very few Americans of any political stripes who could say no to this music legend, who also happened to sing "Happy Birthday" to Secretary Clinton yesterday.

Regardless of who wins on Election Day, there will be no clear "mandate." Hillary Clinton's unfavorable ratings are unusually high; Donald Trump's just happen to be much higher. And after this bizarre, hostile and cartoonish election—thanks to a candidate who probably never wanted to be President in the first place—there will be many pieces to put back together.

In times of celebration or difficulty or healing, music has played a pivotal role. And the next President will presumably be at the helm during all three simultaneously. Thankfully, there are plenty of great musicians available to help.

The Cool Kids tease triple-album with new song 'It's Yours, Pt. 2'

Some of our favorite moments at Jazz Fest: Stevie Nicks, Zac Brown & more