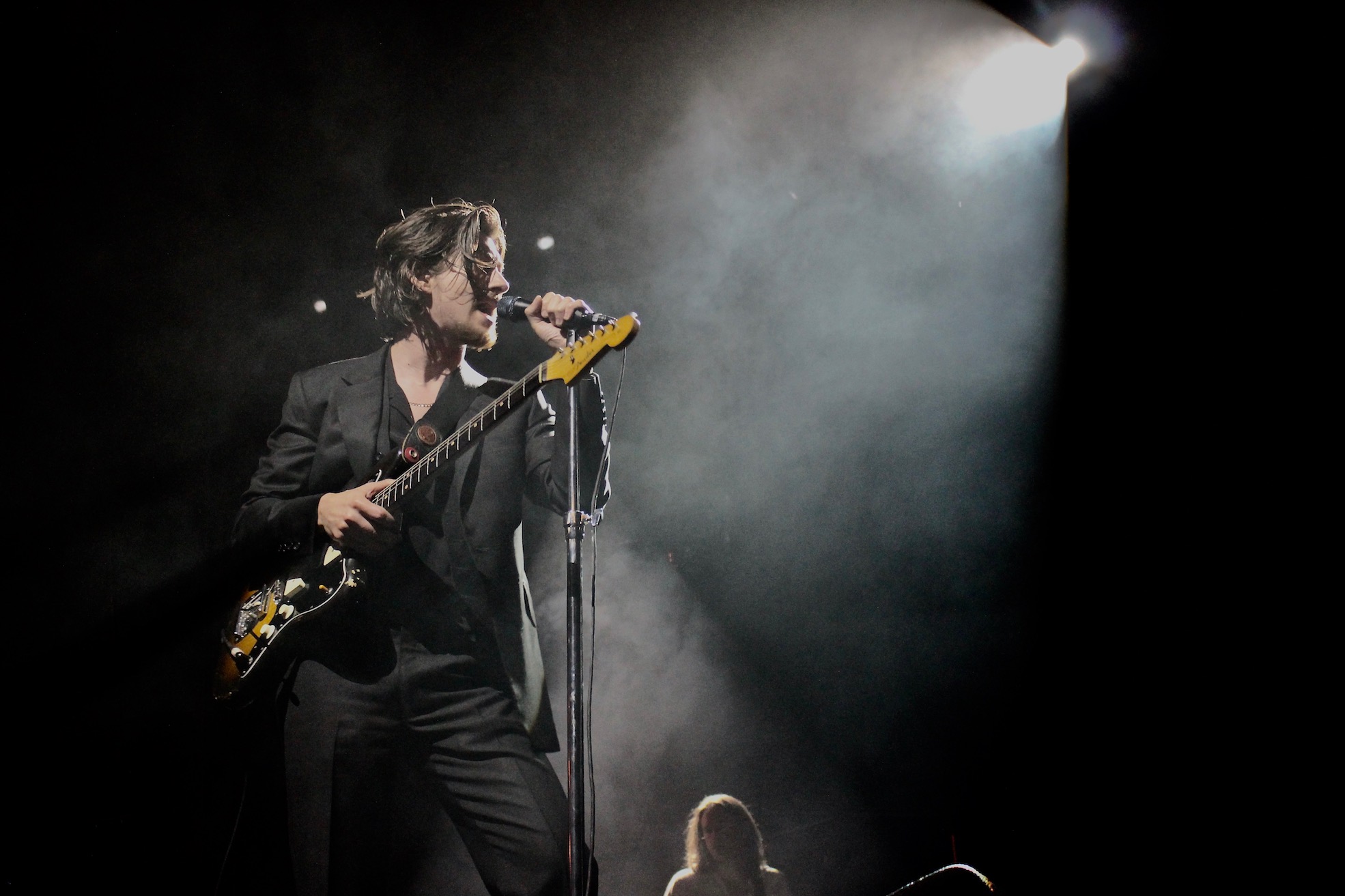 As Arctic Monkeys’ frontman Alex Turner crooned “Take it easy for a little while/ Come and stay with us/ It’s such an easy flight,” on the opening number at their Hollywood Forever Cemetery show in L.A., the sold out audience needed no convincing. Playing what looked like a Wurlitzer, he set the mood for a lounge bar, presumably on the moon. Him, playing the role of a fading lounge act in a future as imagined by ‘60s space cinema auteurs.

One of three SoCal shows to kick off their 2018 tour, ahead of their much anticipated sixth album Tranquility Base Hotel & Casino, the unfamiliar lyrics were off “Four Out Of Five,” a track off the new album. In the age of singles and streaming where the idea of an album has sometimes gone by the wayside, Arctic Monkeys are bucking the trend, having decided to release no singles until the album drops this Friday, May 11. To the band’s credit and Turner’s absolute ease on stage, with material old and new, if any band can pull this stunt off, it would be Arctic Monkeys.

Back after five years, they have been selling out shows across the country, almost instantaneously. Tickets for this show were sold on resale sites for as much as 10 times the original price. But no one in the audience last Saturday night looked like they were crying over spilt milk.

Things quickly notched up a couple of gears with AM hit “Arabella,” followed by Suck It and See’s “Don’t Sit Down Cause I Moved Your Chair.” Pulling from their entire oeuvre, beginning with their 2006 Lancashire-recorded debut Whatever People Say I Am, That’s What I’m Not, right through to three Tranquility tracks.

They also played with aplomb the lesser known B-side “You’re So Dark.” As Turner switched his Fender out for an acoustic, “The Hellcat Spangled Shalalala” – also rarely played live – got a new arrangement. Plus all the sing-and-dance-along favorites from “Why’d You Only Call Me When You’re High?” to “505,” “Brainstorm,” “Crying Lightning” and “Do I Wanna Know.”

Turner in a sleek, black three-piece, sporting a goatee and tinted, ‘70s sunglasses—though the sun had well gone down—channeled his best Serge Gainsbourg: Louche-like but on impeccable form. His cohorts were also on hand; childhood friend and fellow L.A. transplant Matt Helders kept pace on drums, with the still U.K.-based Jamie Cook on guitar and Nick O’Malley on bass—both spotting similar straggly long hair, and slouchy-but-not-sloppy, high-waisted dress pants. “There’s quite the trouser battle going on between the fellas to the left and right,” Turner remarked before launching into “Snap Out Of It.”

Aside from Turner, all are now married with kids. The foursome have spent much time apart but the quality of their performance onstage felt seamless, even when eagle-eyed observers spotted Turner forgetting a line or changing a chord. Those are the idiosyncrasies that fans love anyway. 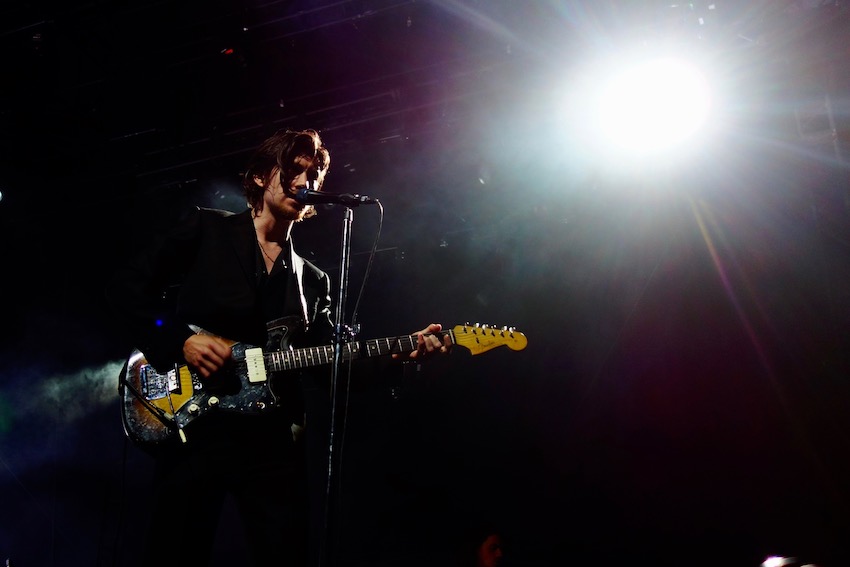 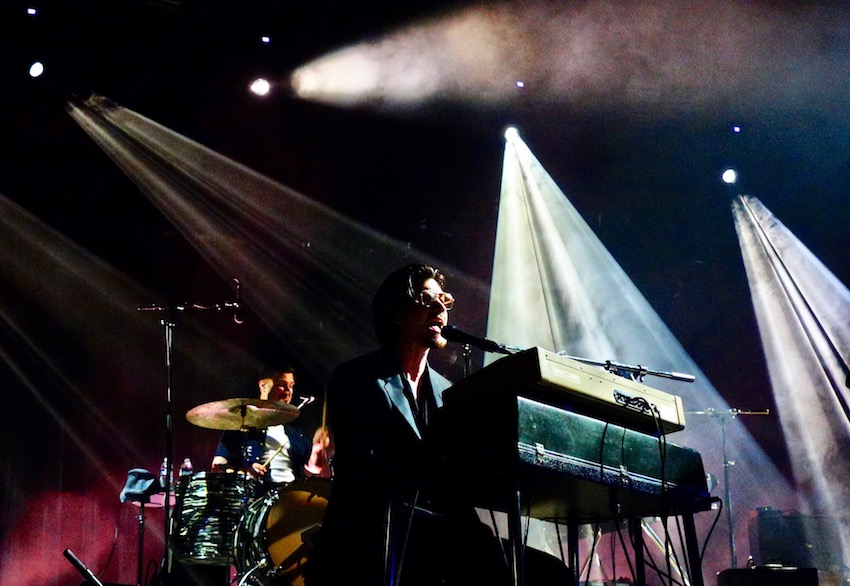 On the surface, “Four Out Of Five” appears to be a slight departure from the heavy Sabbath/Zeppelin-riffs of AM that brought their work to a whole new mainstream audience in America. In truth, it slots like a dollar in jukebox when placed on the continuum of their ever-evolving sound since the days Turner decamped from Sheffield to trek through the desert and record with Josh Homme for Humbug. His wordplay hasn’t lost any of its complex lyricism, placing us in the midst of lairy or knowing situations. The new songs also employ a stream-of-consciousness mode of storytelling, that’s as equally effusive as the songwriter’s earlier, more direct style, and just as enticing.

For another Tranquility offering, “She Looks Like Fun,” Turner invited opening act Cameron Avery back on stage to play the keys on this spacey tune that has echoes of Bowie’s “Moonage Daydream” period. Pounding drums and power chords collide to give turn to wandering guitar solos and quieter but no less dramatic lyrics like, “There’s no limits to length of the dickheads we can be,” as Avery intoned, “She looks like fun.”

Avery, best known as a member of Tame Impala and Pond, had earlier invited his newly wedded wife, model Alyssa Miller, onstage to sing with him on “Dance With Me.” The track is off Avery’s own solo effort, Ripe Dreams, Pipe Dreams, an album of lounge-act inspired pieces in the same vein as Tranquility. Not at all surprising considering Avery opened for The Last Shadow Puppets on their Everything You’ve Come To Expect tour last year.

“One Point Perspective,” another new track, saw them change the evening’s tempo again. After ending the set with the high octane “I Bet You Look Good On The Dancefloor,” they returned for the encore with this whimsical one-key, piano-led melody. The track is nothing if not enticing, even if no one could sing along to it.

It makes a wry observation of the world we live in – where a documentary beautifully shot, with a score he’s compelled to listen to repeatedly, will not gain its rightful audience. That is interspersed with the singer’s inability to keep his train of thought, entertaining fantasies in his head of quitting the spotlight, to owning up to some wrongdoing as he quipped, “I suppose sinners must die.” And anyway, he’s “lost his train of thought.” But we were still hanging on, to his every word, as the groovy bassline gave way to the swirl of lush strings. Open the pod bay doors, Al.

Setlist
“Four Out of Five”
“Arabella”
“Don’t Sit Down Cause I Moved Your Chair”
“The View From The Afternoon”
“Why’d You Only Call Me When You’re High?”
“505”
“The Hellcat Spangaled Shalalala”
“She Looks Like Fun” (with Cameron Avery)
“Crying Lightning”
“Do I Wanna Know”
“Brainstorm”
“Pretty Visitors”
“You’re So Dark”
“Snap Out of It”
“Cornerstone”
“Knee Snocks”
“I Bet You Look Good on the Dancefloor”

Encore
“One Point Perspective”
“One for the Road”
“R U Mine”