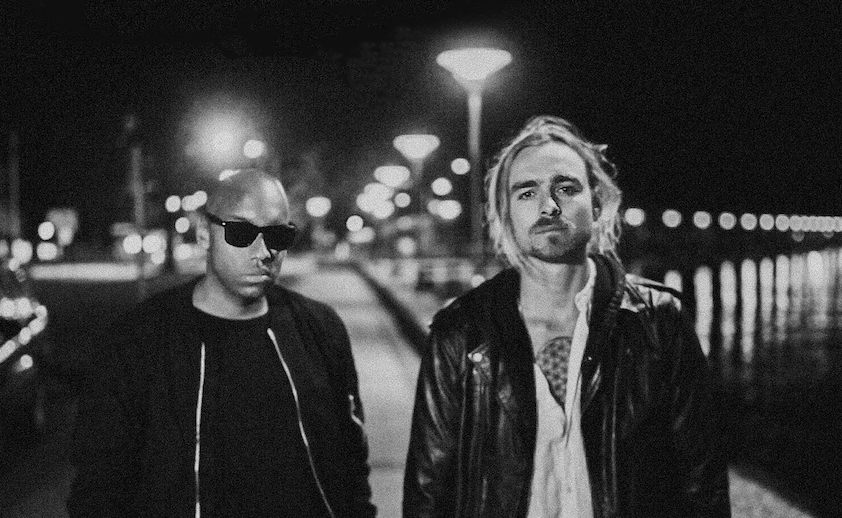 After years as one half of indie-pop duo Little Earthquake, Aussie singer Matthew Hyland is expanding into hip-hop, with the release of a new collaboration with New York rapper Somnous (aka Sean Rogers).

The song, titled "IW2FU" (an acronym for the rather straightforward "I Want To Fuck You"), arrived Friday. It follows Little Earthquake's last recent track, which was released in 2017.

According to the artists, "IW2FU" is inspired by "heartbreak, lies, and the desire for second chances." It's a preview of additional music to come.

We talked to Hyland about the new collaboration and his future plans ahead of the release of the song, which can be heard below, followed by the Q+A.

How did you and Sean (Somnous) connect?

I met Somnous in New York. I was touring North America and Canada playing shows with some mutual friends; naturally, he came out to catch up with everyone. We all got to drinking at a bar after the show. (By the way, Seth Green and Macaulay Culkin watched that show from the back of the venue; it was super cool.) Somnous showed us around the city and made sure we got the full New York City nightlife experience. We got along really well and decided to stay in contact.
We’d met up again a lot of the last couple of years talking about writing together and we finally got the time, everything aligned, and this single is the result of that (along with a few more to come).

This is kind of different for you. Had you always wanted to branch out and explore hip-hop?

Yeah, it’s definitely different to what I usually release, but I’ve always really enjoyed hip-hop. I would say it’s the dominant genre on my Spotify playlists.
I’m very diverse in my appreciation for music; I love everything from EDM, rap, hip-hop, to country, folk, classical and pop.
I feel like there’s so much to learn from each genre that I can take and use to grow as a producer/songwriter.

What is the inspiration for this first track?

So Somnous and I were in the studio, discussing our vision for the release, how we want people to feel. And we’ve always played it really safe, in terms of writing well-written, family-safe music. We decided, we wanted to see if we could combine our previous influence of pop/hip-hop with a little of that early Eminem kind of shock factor.. Just enough to make people’s ears prick like, “what is this” haha... But not enough that we get boxed as shock artists, or inappropriate for a wide audience.

You had taken some time away, but now you're apparently plunging back in. What's the plan, what comes next?

Last year was a really quiet year musically for me. I was taking some time out to focus on my family life. I got married to a beautiful woman, travelled Europe eating the finest pizza, tasting the best wines. Almost died trying to cross the Greek islands back to Athens in a rubber speed boat, during a heavy storm... Crazy, but thrilling haha.

This year has certainly been all about getting back to the music. I’ve been working non-stop on new tracks, Somnous and I plan on releasing a handful of singles over the second half of 2018, and I’ll be releasing my officially debut solo record, which is really exciting for me. So there’s a lot to come!