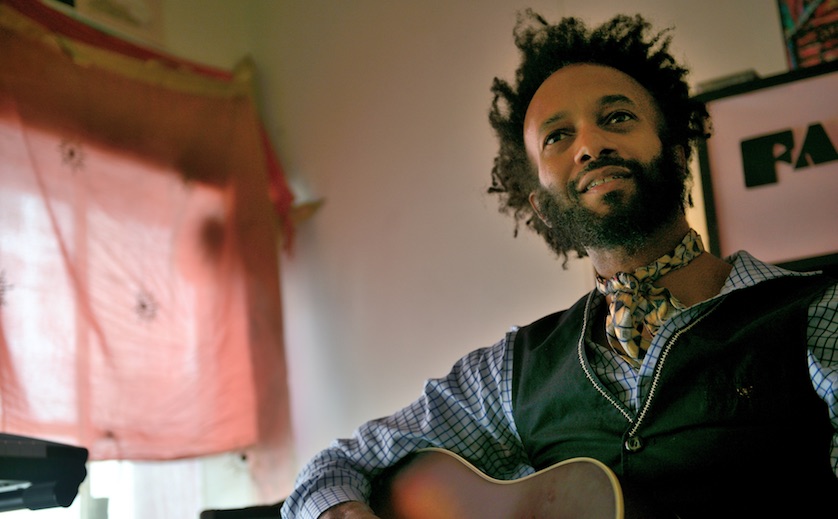 Blackball Universe is a collective of film-makers, artists and musicians whose offices are located in downtown Oakland. Art by mix-media artist Omiiroo currently hangs on its walls and as we walk up the entrance stairway, the unmistakable, bluesy guitar riffs of Fantastic Negrito beckons.

A prominently featured Fantastic Negrito lightbox greets you first when you enter the modest recording studio. And then an assortment of instruments, mic stands and an orange-upholstered Charity shop sofa. Across the corridor is a handy in-house bar, followed by a large room with more eye-catching art, as well as the offices of the producers, managers and others in the collective who keep things running smoothly.

Xavier Dphrepaulezz (aka Fantastic Negrito) was the first-ever Tiny Desk Contest winner back in 2015. Initially unconvinced that NPR would be interested in his brand of roots-based blues, it was others in the collective who outvoted him and pushed him to enter the contest. Since then he has gone on to tour the U.K., Europe and Australia. Earlier this year, without the backing of any major record label, his debut The Last Days of Oakland won a Grammy for Best Contemporary Blues Album.

However, winning a Grammy and an ever-growing profile—thanks to recent arena tours with Sturgill Simpson and the late Chris Cornell—has led many fans and industry folks to assume he might upgrade to a fancier studio to record Please Don’t Be Dead, the working title to his follow-up. He sets it straight though.

“No, I want to keep recording in this kinda crappy little studio where you can hear the trucks and the cars outside,” he concedes. “There is something humbling and beautiful about it; you can’t buy this. There’s a vibration here.”

He points to the words of Malcolm Spellman, one of his partners at Blackball Universe, for affirmation. “‘Man, the most honest moment that you’re gonna get is in that room, that studio,’” he recalls of Spellman. “‘And after that you’re pretty much full of shit,’” he says with a laugh.

Dphrepaulezz continues recounting Spellman’s words of wisdom: “‘It’s true. When you’re on stage it’s all that posturing; when you do an interview you say all the right things; but when you’re in the studio—that’s sacred. This is hallowed ground, when you lose that, you’ve lost that magic.’”

Spellman, who has worked with Dphrepaulezz for more than a decade, produced Fox series Empire and is currently working with HBO on Confederate. He eschews "success" in the form of money and accolades for BBU’s prime directives: authenticity, edge and excellence. There isn't a secret pursuit of shiny things.

Today, Dphrepaulezz finds much comfort and inspiration in his gritty Oakland surroundings. That wasn’t always the case; in the ‘90s he moved out from the Bay Area to Los Angeles after a close brush with death, guns and gangs. It didn’t take him long to land Prince’s manager and a million dollar Interscope record deal. None of it brought him success or happiness.

On his studio wall hangs a white board with a series of 14 song titles: such as “Chronic Pain,” “A Letter To Fear,” and “Fist Fuck Friday.” Some have little stars next to them indicating they’re ready to be mixed. He has another five weeks to finish recording the album. It should be ready for release late in the spring or early summer of next year.

While The Last Days of Oakland was an observation of how the city in which he came of age has changed, Please Don’t Be Dead is poised to be the change; to promote uncomfortable conversations and be a bridge for people with opposing world views.

“Because of the climate we now find ourselves in, this one’s got more teeth,” he says, referring to the worrisome state of affairs, and the barrage of bad news, propagating our social media feeds. “There is no middle ground anymore? I remember when we used to have a middle ground.” In order to facilitate these conversations and not put off listeners who may see it coming a mile away, he will employ riffs: yes, ultra catchy guitar melodies that will hook people in. 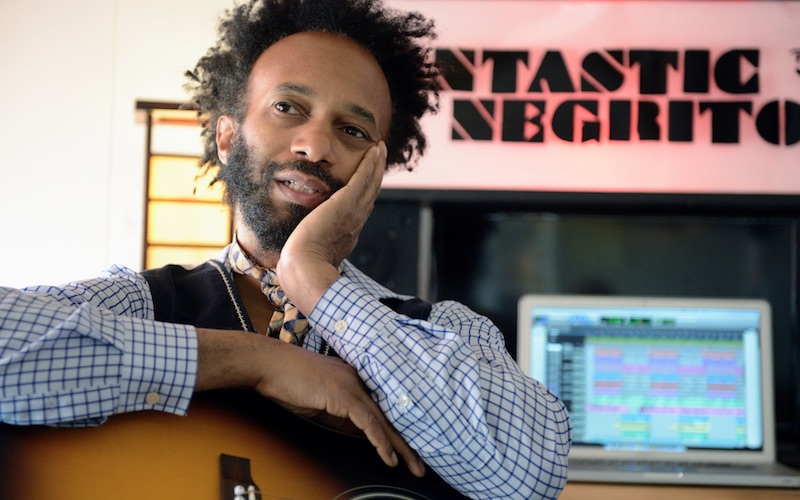 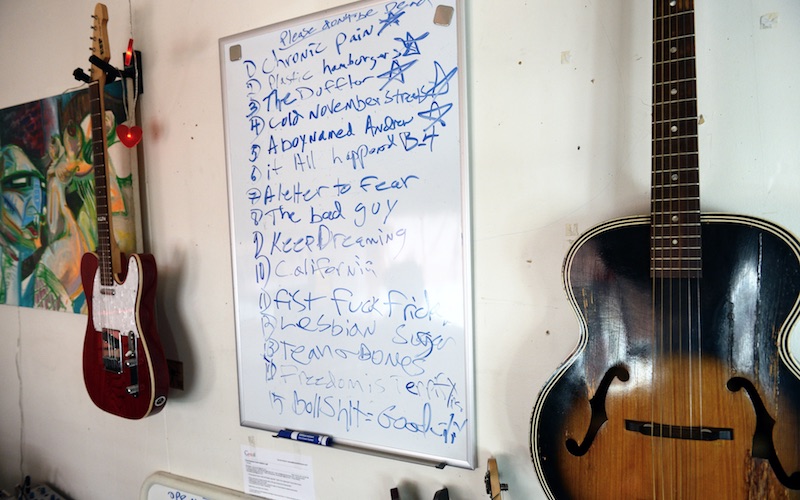 “This one is more of a riff album,” he says. “I think there’s something very deep in the human DNA that is attracted to riffs; you see that at concerts, that one riff people hear and go ‘Oh, it’s that riff,’ and it draws them to the stage. I think there’s something in us, especially the blues riff; it brings people together, it’s a great ‘uniter.’ One thing I’ve learnt from touring, especially over the last year with people like Chris Cornell and Sturgill Simpson is, ‘Hey, you can unite all these different people from all these different places, even people from red states with their long beards; they’re gonna groove out, too, if you’ve got the riff.’

“That’s been a central theme to this album, every song has a specific riff. And I feel that’s our tool and our weapon for this album, against tyranny, bigotry, racism, neo-Nazi’s; we have the riff, we have the guitar and we have the stage. And people love that,” he says picking up a guitar.

“There was this one song I played a lot during the Temple of The Dog tour, it was my opening number, called 'Plastic Hamburgers.' It has this riff [he plays a deep Southern blues riff that feels like it’s reaching into the depths of your soul]. I remember people just loved it.”

He laughs at the thought that he was toying calling the album Recovering Narcissist. “I thought, maybe that’s too heady. Please Don’t Be Dead, it’s so simple, interesting and it can go anywhere. I feel that way about the country too,” he sighs. “Damn, I feel like we’ve worked so hard to get here and now… ‘Is it over? Is this the ride?”

It’s not a stretch for Dphrepaulezz to believe in our primal need for music and its ability to save us. For five years between 2007 and 2012, he took a leave of absence. The failing music business of the late-‘90s left him disgruntled with the industry. A tragic car accident that left him in a coma also broke several of his bones, including his hip and, most importantly for a musician, his right strumming hand. He now refers to it as the claw as it was fixed with metal pins.

For a while after he rehabilitated back to health, he still made music in whatever incarnation the charts seemed to promote but eventually he felt like he had nothing to say. So he walked away. Returning to Oakland, he sold most of his gear and tried his hand at more bucolic pursuits; raising a family, growing medical marijuana, vegetables and having chickens.

One day as he tried to no avail to settle his crying infant, he caught sight of the neck of the one remaining guitar he had left. In desperation, he pulled it out from under the sofa. “This is the sofa,” he tells me now as he moves over to sit on it. “I strummed a ‘G’ chord and his face lit up. I felt a chill up my spine.”

Growing up on the streets of Oakland with electric boogaloo and hip-hop, the Beatles was not in his repertoire, but he taught himself “Across The Universe” because he found it a useful lullaby for his son. This he credits for getting him back into music. Today, he sees tragedy or any obstacle laid in his path as an opportunity to do something great. Or as he puts it, ‘turning that bullshit into some good shit,’ an anthem and fan favorite he’s recording for the upcoming album.

“We’ve worked so hard to get here, and now, it can’t all have been for nothing. I’m sure you’ve heard me say this; for artists, journalists, photographers—we’re the army right now. We’re the final line before tyranny,” he declares emphatically. “I believe that all of our work collectively is really important right now; what we say, what we do, we have to do with integrity, grace and consideration for human beings, of every color in the spectrum.” ■