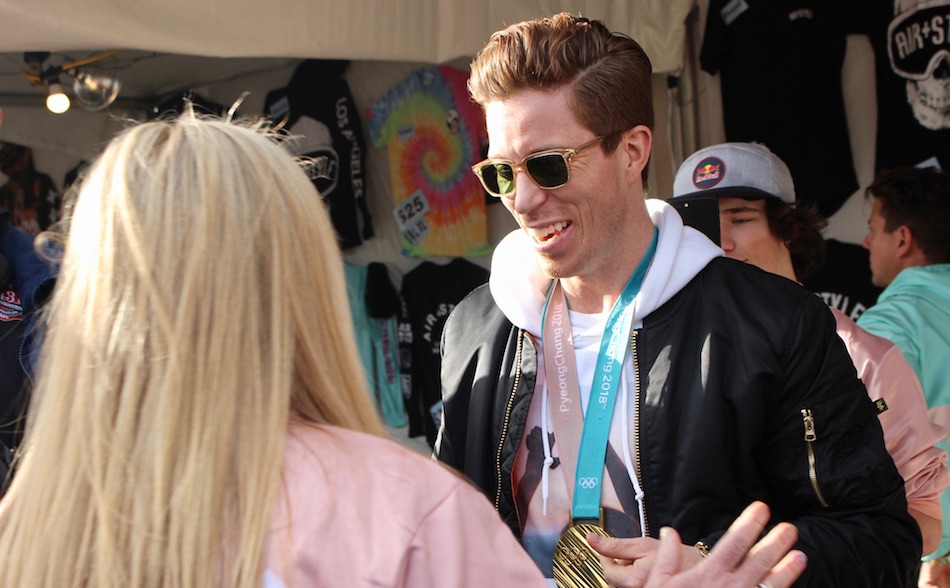 Fresh of his third Olympic gold medal win, king of the halfpipe Shaun White was all smiles and hugs at Air + Style this past weekend, March 3 and 4, in Los Angeles’ Exposition Park. EDM DJ-producer Zedd headlined on Saturday night, while French indie-rockers, Phoenix did on Sunday. The lineup of 20 acts also featured standout sets from Phantogram, Mura Masa, Cut Snake, DRAM, Tinashe and Gucci Mane.

White was on hand to meet his fans, young and old, happy for them to share in his joy as he signed merchandise, gave hugs and offered them a chance to lay their hands on the Olympic gold medal he wore proudly around his neck. On the first day, the line to have selfies taken with the 31-year-old snaked around the event’s official merchandise stand.

In the Swatch booth next door, Kyle Mack, the Olympic silver medalist also fresh off the Pyeongchang slopes, met his fans between competing in the Snowboard Street Style event. Despite his Twitter tète a tète with Ivanka Trump and scoring a White House invite, the 21-year-old, appeared soft-spoken, humble and happy to indulge his fans.

For the first time in the four years—since White bought and has staged the Air + Style Festival in California—they passed up on Big Air, the competition that demands the construction of a 16-story ramp, for the less towering Snowboard Street Style. The new mini-slopestyle course required multiple tricks from snowboarders but lacked the sheer bombast of Big Air, prompting some festival-goers to stay away this year.

Another first was the street skateboarding competition. Showcasing young skaters such as Hawaii’s Heimana Reynolds as well as Lizzie Armanto and Nora Vasconcellos, while bands like Surfbot played live during the final competition, it was a treat and should continue to bring younger fans out in the future.

In terms of the musical component, there was something for everyone and not quite enough for anyone. A gold medal isn’t enough to bring folks out in droves on an unseasonably cold March weekend, bookended by the Oscars. Together Pangea had good tunes but as a young band and with hardly an audience, nothing really stood out. Brooklyn band Wet’s moody musings was a washout.

Not until almost sunset, when Australian DJ duo Cut Snake hit the turntables with their infectious blend of techno and deep house, did people really get dancing. One of the best acts of the weekend, British DJ act Mura Masa built on the happy vibes with hits from his self-titled LP, with the help of live vocalists Fliss. They brought a bit of U.K. edge and grime to the stage with “One Night” originally featuring Charli XCX, “Nuggets” featuring Bonzai and the A$AP Rocky track “Lovesick.” It was the best pairing of music and what Air + Style represents; a festival with a global outlook and strong urban connection.

It wasn’t that the lineup featured some acts without pulling power; there is something admirable about giving a platform to lesser known acts such as Together Pangea and rising stars such as Peruvian, A. Chal and the multi-talented Tinashe, (how is she not already a household name!?). But the festival could benefit from more focused curation.

It could take a leaf from a boutique festival like the Bay Area’s Treasure Island Music Festival, which skews more EDM on Day 1 and indie rock on Day 2, allowing rap/hip-hop acts to sit seamlessly in the lineup. From thereon, the two stages build on the quality and popularity of the acts as the day progresses. Zedd and Phoenix may be great dance acts and decent radio fodder but neither headliners hardly push the envelope musically, unlike the snowboarding events that Air + Style have pioneered. Big Air was a mainstay of the festival’s before it ever was an Olympic sport.

If White’s festival could succeed in serving all three masters: snow, skate and music, Air + Style would thrive as a premiere boutique festival with its own unique edge. Judging by the 34,000 people who showed up over the weekend, and the six-year-olds strapping on snowboards for the first time or five-year-olds trying their hand at skating on the concrete car park, there is clearly an unwavering appetite for it.

Air + Style’s next stop is Sydney, Australia in August.