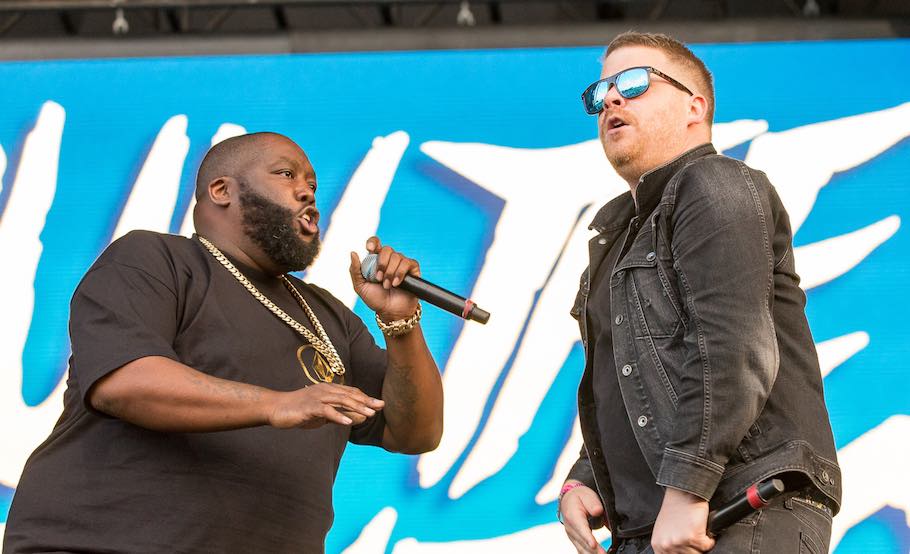 Photo of Run the Jewels performing at Lollapalooza 2017, by Dan DeSlover
—

After a stormy first day forced headliners off stage and prompted an evacuation, Lollapalooza's second day was a much more successful outing.

Once again, emerging and newer acts seemed to stand out earlier in the day, with the likes of Bibi Bourelly, SAINt JHN, Kaleo, Mondo Cozmo and Bishop Briggs delivering some of the best sets of the weekend so far.

Later in the afternoon, reliable favorites proved victorious, with Jidenna lighting up the Grant Park stage with a mighty performance, as Ryan Adams soared later on at Tito's. Majid Jordan also conquered the Pepsi stage, with a crowd clearly full of devoted fans singing along with the duo, who teased their new album coming this fall.

Also up was Phantogram, making their Grant Park return after seemingly being on tour for the past three summers. And their electric show was evidence of why they continue to be festival circuit favorites, as they ran through the hits for an enamored crowd on onlookers.

Run the Jewels then unsurprisingly lit up the Grant Park stage with a lineup of bangers as fans roared back. Near the end of their set, the duo took a break for a more somber moment, as El-P told the audience they were dedicating their performance of "Down" to the late Chester Bennington of Linkin Park.

"If you're here and you can't see past the darkness, you are not alone," El-P said, addressing the crowd. "Look around you. We've been there. But we need you here."

Fans also got a surprise visit from hometown emcee Vic Mensa, fresh off the release last week of his immaculate debut album The Autobiography. While he wasn't initially on this year's lineup, he took over Perry's stage for a handful of songs.

Over at the Bud Light stage, Foster the People relished in having the big stage and easily the largest crowd of the day—until The Killers' closing set later on, of course. The band did not disappoint, giving fans what the came for, with a number of their standout cuts sandwiching their big hit "Pumped Up Kicks."

Closing the night were Blink-182 at Bud Light, offering a raucous show in support of their recent album California. Meanwhile, The Killers made their official return to Chicago to headline the Grant Park stage ahead of a new album, Wonderful Wonderful, which is out next month.

Surrounded by a massive crowd, Brandon Flowers and Co. seemed confident and refreshed, excited to be back as they teased the new record at the top of their set, before unleashing hit after hit, including "Somebody Told Me," "Human," "Shot at the Night" and "Mr. Brightside."

See photos from Day 2 of Lolla below, stream performances all weekend here and follow our 2017 coverage here. Photos by Dan DeSlover, unless otherwise noted.