Back in the Game: The Night Game's Martin Johnson on His Unusual Collaborators, Falling in Love with Music Again 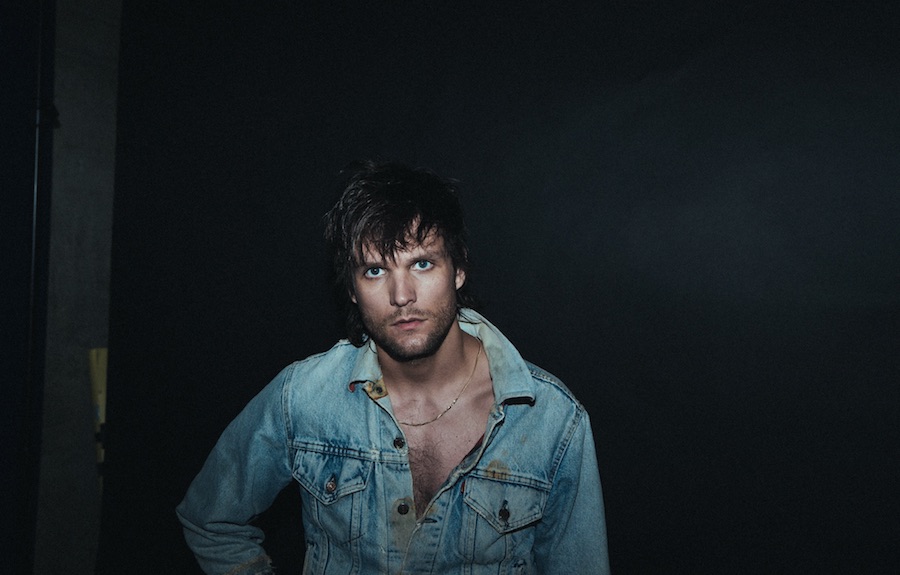 After a decade with his old band and despite a promising second career as songwriter/producer, delivering hits for top 10 pop artists, Martin Johnson had fallen out of love with music. It took a moment of reckoning, inviting in some outré collaborators and a return to that familiar ‘80s sound that put him firmly back in the saddle with his latest solo project The Night Game.

In the mid-aughts when the impossibly buoyant guitar pop and chorus yelps of bands like Good Charlotte, Rooney and All American Rejects dominated the airwaves, Johnson had success as the frontman of Boys Like Girls. When that moment passed, Johnson found himself at an emotional crossroads. He then moved across the country and re-emerged as a songwriter—penning for Ariana Grande, co-writing with Jason Derulo, and producing for Avril Lavigne and Christina Perri.

Before long, he was jaded and at the crossroads again. This time, he was forced to re-think if he even wanted to make music anymore. Like his lovelorn hero in “The Outfield” – an insanely catchy single where Johnson delivers on emotion, and not just emoting – Johnson, always the underdog, proves to himself that getting back into the game is worth the sacrifice.

“The Outfield” caught the attention of John Mayer, who immediately invited Johnson on his big arena tour, quickly growing The Night Game’s profile tenfold. “You haven’t caught a break in a second and then John Mayer does a really nice thing for you,” Johnson tells us, from his new fixer-upper in Bronson Canyon. “It was great. I’m a huge fan; I loved his music when I was in high school and I still do now.”

Johnson also reveals what it was like working and going on tour with outlandish singer-guitarist Kirin J Callinan. The Australian, known for his predilection for kilts and 10 gallon hats, seems to relish being on the wrong side of good taste, but his savant guitar skills were the perfect conduit for Johnson’s Night Game.

“Once In a Lifetime” has the storytelling of a Paul Simon song, with Springsteen’s salt-of-the-earth vocals. Yet, with unusual-sounding guitars and modern production, there is something New York and David Byrne about it. Can you tell us a little about the inspiration for the sound?

I didn’t really listen to Spotify or the radio when I was making the record. I was listening to stuff on cassette and I think you hit about six of the major references for that song. Musically, I didn’t want to find myself chasing. I’ve been writing for other people so long that I tried this exercise: Turn off the radio and don’t listen to Spotify’s hot new sounds. I also turned off the computer. I only allowed myself to listen to my cassettes so the sound went back to what made me want to play music in the beginning.

Lyrically, it sounds like there’s a crisis going on...

Yes, it was about a time in 2008-2009, when I was living in Brooklyn and had a bit of an awakening. I was really very self-destructive at the time and was like, “Man, are you going to blow your brains out and continue with this lifestyle or take this opportunity out?” You know, whatever things I was putting in my body to feel better, whether I was chugging cough syrup to get to sleep, then being so paranoid playing blind detective, always checking the blinds or front door, thinking somebody was there—it was a constant year of feeling like the world was closing in on me. Then, there was this higher power-intervening moment. I never physically had a gun to my head—I’ve always had a good family and friends—but it was a bad time, and there wasn’t a ton of answers. I saw that pinhole of light, got out of that apartment and on a flight out of New York. Then a lot of things changed.

Is that when you came to L.A.?

I came to L.A., but I don’t think it’s the place to seek answers. L.A.’s not exactly a great place for people in crisis. It can make it worse because it’s a pretty lonely city, the desperation and self-destruction that’s here is probably louder than in New York. For me, it was the answer because it was something different. I checked in at the Hotel Grafton on Sunset, stayed there for four months, quit drinking and started making music again.

Did that moment became the impetus for The Night Game?

It took me on a detour first. I found sanctuary in different places, different things, then I fell out of love with all that. My life has always been about excess. Just before I made this album, I was playing a shitload of poker, staying up really late, sometimes ‘til seven in the morning. I wasn’t doing drugs or drinking—filling the void with anything else possible; food, sex, gambling. Because I had fallen out of love with music. I wasn’t happy with the music I was making. It didn’t feel like me. I wasn’t telling stories anymore; part of the reason I wanted to be a songwriter was to tell these stories that people could relate to. To be up on a stage, looking down into the eyes of someone who knows the words and sings along—that’s when you know you’ve made an impact. I was at an emotional crossroads, less life-threatening than my time in Brooklyn, but it was my anger at music and where it had brought me. When I wrote this album it wasn’t, “I want to work with these musicians and for it to sound ‘80s,” or whatever. It was literally, “Should I quit music and open a jelly store?” So, I cancelled everything and thought, “Let’s see if can I dig myself out of this hole.”

Why the name The Night Game? And is it just me, or does that sound like an ‘80s TV show?

(Laughs) I like ‘80s TV shows, so that’s OK. It just fit the music for me. You never want to completely move the needle so the name’s distracting. I really flirted with a lot of names, and then realized that I was naming the project like it was a dildo company. (Laughs) I had The Night Game written down on a post-it note and I really like the Paul Simon song of the same name. I’m a big Paul Simon fan from the time I was in preschool. Being a big sports fan, too, I love that drama; when the lights go on, the pressure’s on—it felt like the Universe was telling me something. I grew up going to Fenway Park in Boston with my father. He would finish work and we would go there together; when the lights came on, it was a place where dreams happened.

Dev Hynes directed your video for “The Outfield.” That’s an interesting, unexpected collab…

Dev heard the song and really loved it. We have some mutual friends. He said he would love to direct it, so we met up and had this idea; it’s less video and more a moving visual. I think it’s interesting, the people who have gravitated to the project. For instance, I met with every co-producer you could think I would work with. In the end, I went with Francois Tetaz, the most eccentric out of all of them. Certainly, on paper, it didn’t make sense. But I couldn’t have asked for anything better.

You also worked with Kirin J Callinan (who’s been called a shock crooner among other things), another outsider. How did you two end up working together?

I saw a video of Kirin just making noise on the street using guitar pedals. I never even heard him play a note, just squirming around with a bunch of pedals. Francois played it to me. And I said, “This is the guy! We should fly him from Australia to work on the album!” So he flew in and from day one, we had this synergy. Every voice I felt was missing on the album, he was able to fill in, using his guitar. Kirin is the most inventive guitar player in the last 15 or 20 years. I mean it, seriously. I don’t think anyone has spoken through a guitar the way he does. You know his background?

Yes, his musician dad worked for Roland when he was little.

Kirin could play effects pedals before he could play guitar. He grew up with music in his DNA. Allowing his voice to run wild on this album—it’s been so beautiful playing all these songs live with him and to see what he brings to a live show. Just as a creative force, I’ve loved collaborating with him. Again, if you heard his solo stuff and what I’ve done in the past, on paper, it doesn’t make sense. But the second he came in, it reminded me of the stuff that I grew up hearing. It just worked.

I saw you guys live at the Roxy last year, Kirin in his cowboy hat—he is such a big personality. But it’s like his song “Big Enough” (with Alex Cameron), the world, this project, it’s big enough for both of you.

(Laughs) Yes, it is big enough! The way I looked at the making of this album is—I realize, I know nothing. When I was 22, I thought I knew everything. I’ve had to let go of it all. Man, opening up that door musically and allowing somebody else to be heard, in the context of my project and what I want to say as a songwriter, has been amazing. To have players with these distinct voices; let them cut loose and play live, with no set parameters. And pretty much everything is played live. I think what makes it modern and yet nostalgic is that nothing is really made by MIDI. The music is not made in the machine. You hear the performance. The hardest thing for me is embracing the imperfections. Instinctually, how I used to make records is like, “How do I pour Windex over this and get this perfect as possible?” And that can be negative to the emotion of a song. I like things to be organized. If I’m on tour, before I go to bed, inside my suitcase the clothes have to be folded like there are on sale for retail; color-coded, underwear pinned in a row and socks are all in bundles, otherwise I actually can’t sleep. It was letting go of that, in the musical form in order to make this record. It was tough to do but that’s where Kirin was so helpful.

Now as a soloist, what do you hope to achieve with The Night Game that you perhaps couldn’t realize as part of a band, and then again as a behind-the-scenes songwriter?

I’m just excited to still be doing this. And to feel really connected to every note.

You were lucky to go on the road with John Mayer last year, just on the back of one single. Of course, you’ve both been the subject of Taylor Swift songs. Did you think that was a funny coincidence?

(Laughs) I don’t know what you’re Googling or who has been editing my Wikipedia page! I don’t know—but do you kiss and tell? Because I generally don’t.

Tickets for the tour can be found here.