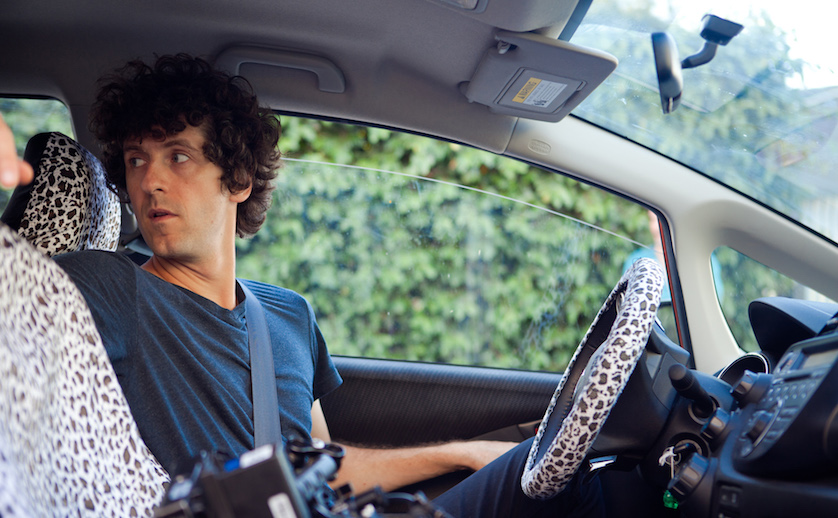 New York musician Jack Dishel first came to prominence as the guitarist of Moldy Peaches, but these days he has proven himself something of a creative Renaissance man. In launching his web series :DRYVRS, all of Dishel’s talents came to bear. And with the first episode featuring Macaulay Culkin going viral two years ago, more people than ever now know of his band Only Son.

In the mid-’90s, the Moldy Peaches played a key role in New York’s antifolk movement, scoring a breakthrough hit with “Anyone Else But You” from the Juno movie soundtrack. Since 2006, Dishel, who now splits his time between New York and Los Angeles, has been putting music out as Only Son.

Despite promising tracks such as “My Museum,” “You Stayed At Home,” “Kick ’Em Out” and “It’s A Boy,” which highlight his gift for nuanced songwriting, Dishel has not found the kind of mainstream success of his peers—with bands like The Strokes or even his wife, Regina Spektor, with whom he writes and often performs.

In recent years he has branched out to do one-man comedy shows, appeared in music videos for Father John Misty and Adam Green, and acted in an upcoming Josh Klausner musical film, Wanderland. He acts, directs and sings all the music in :DRYVRS – from tracks such as “Ten Year Tunnel” and “See The Idiot” off the Only Son album, to a Dean Martin-rendition of “Jingle Bells,” and all the incidental background music; listen out for his version of a “Sicilian troubadour” or “castrated Latin choir boy” in Episode 4 “Scare Tactics.”

A self-confessed “nice guy,” whose affability secured A-list cameos from the likes of Tom Petty, as well as offbeat performances from Rosanna Arquette, Glee’s Darren Criss, and Curb Your Enthusiasm’s Jeff Garlin, he pulled the final rabbit out of the hat with Seth Green as a reluctant superhero in last month’s Halloween-themed installment.

We spoke to Dishel about the real inspiration for :DRYVRS, fatherhood and what it’s like being the man behind Regina Spektor.

It seems to me that :DRYVRS was basically an extended PR stunt to promote your album?

It was! (Laughs) The original idea was to not make an album and then put it out into the void, only to get the deafening silence of the infinite noise of the internet. Or worse still, the internet saying, “Who cares?” Now, your music is not just competing with other musicians, it’s also competing with social media and that person that’s going to take 20 minutes to get that perfect selfie for Instagram. In that time, they could have listened to half my album. It’s almost like you release an album and you have to resign yourself to hoping your music gets featured in, like a diabetes commercial, so I thought, “Let me at least try and have some fun with the promotion.” We did that first episode. And then it exploded. It went viral so quickly; I had to actually set my album’s launch aside for almost two years to carry on doing the series. But I was like, “I don’t care, this is so exciting!”

Your first episode went viral and has had over 25 million views with fans clamoring for more. The series seems to have struck a chord with folks. Do you think it’s in part because everyone can relate to being in rideshares, encountering strange drivers or just having the best conversations?

I’m really interested in those human experiences where art and life intersects. When I was recording Only Son in L.A. there were times I had to get to studios from East L.A. to the West side and I would have these really long conversations that could easily take an hour; that’s a therapy session! You know you’re probably not going to see each other again, so you speak very openly. In the ‘90s, there was this HBO show called Taxicab Confessions and they were totally aware of this dynamic between a driver and passenger. It delivered these unbelievable slice of life stories – sure, there was a lot of drunk people but there was also this very real, human side, which was always very revealing. It was quite popular and through the years, there were people who would recognize these passengers in real life and go up to them like fans. I was a huge fan of the show. I think :DRYVRS is my homage to it.

While you were shooting :DRYVRS and recording your album, you became a father. Your wife, Regina Spektor, also released her album last year. I could barely find the time to wash my hair when I had my first baby. How did you find the time to be creative and so prolific?

I don’t know how. The real answer is—I was so terrified of the child coming and taking over all my time that I went into manic overdrive before he was even born. I was like, “You’re not taking going to take all my time, you little bastard!” (Laughs) And then he arrived and I was like, “Wait, you’re so awesome!” What they don’t tell you about having a baby is that you do have free time but you are tired all the time. What you need is more energy to do things in whatever free time you do get. I have learned how important it is to take naps. (Laughs) I’ve since become a champion nap-taker.

You’ve toured with your wife and her fans really love you. Does it bother you that you are the man behind Regina Spektor?

No. Honestly, it never bothers me. Not even when I am super drunk, alone, and in a dark room. The thing about her – apart from the fact that she is my absolute soulmate in the Universe – is that she is a bonafide musical genius. It bothers me that she is not more universally understood and appreciated as such. People who love her know that, but we live in a world where there are so many falsehoods being peddled as truth that we can’t really tell the difference between good and bad. We are fed so much shitty things that we can’t tell what is real. It’s like people who have been told that they are drinking “fruit juice” but it’s actually just this red drink with coloring. Then you give them a real freshly-squeezed fruit juice and they’re like, “It’s gross!” I guess I would feel bad if she made music that I didn’t think was her best. I would be upset if I didn’t like it. But she doesn’t. I have learned a tremendous amount about making music from her. We are always chiming in on each other’s work; I’m the first person who gets to hear her new music and ideas—and the last. We’re like each other’s dual-core processor for the world.

Now that the last episode has gone live, do you have an end game for :DRYVRS, like to pitch it as a Netflix series?

The last :DRYVRS episode went live on Oct. 31 and, artistically, I’ve already arrived at the end game; I wanted to create something with an arc like a series and I did. I do think it’s best experienced all in one sitting, like a short movie with five vignettes. Moving forward, I think it could work as a half-hour show. I don’t even need to get into a car. It could begin with a shot of me getting out of a car – have the story unfold in a house or somewhere, then end with me getting back in the car. The possibilities are endless.■