K.Flay on Playing Outside Lands, Needing to Be Vocal Politically 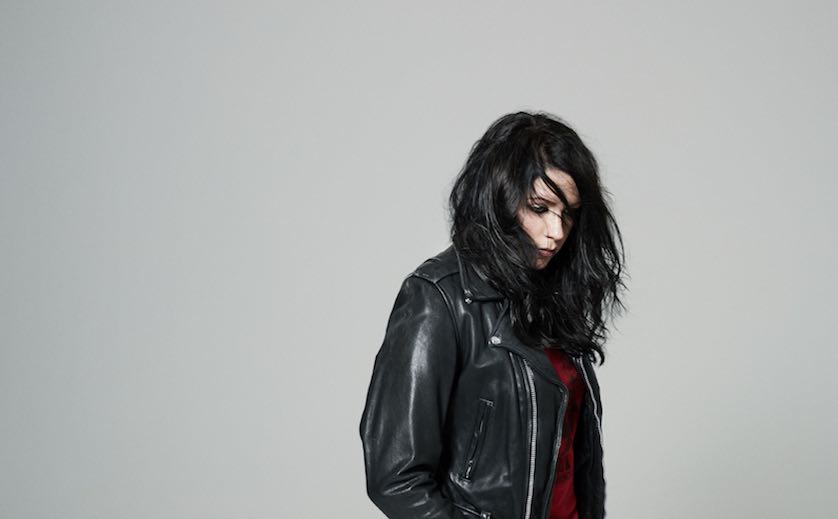 If you are going to San Francisco for Outside Lands this year, be sure to catch rising star K.Flay. The festival, held in Golden Gate Park from Aug. 11-13, celebrates its milestone 10th year with a bill jam-packed with sought-after acts such as Gorillaz, Empire Of The Sun, Alt-J, Lorde, Solange and Fleet Foxes, but the undercard is just as exciting.

After being signed, then dumped by her first major label, a defiant K.Flay released her debut Life As A Dogindependently, and toured on her own terms. On the heels of its success, another major label, Interscope Records, came calling.

K.Flay was hesitant; however, Imagine Dragons’ Dan Reynolds was the manager of the imprint, Night Street Records. He understood well the kind of artist she strives to be and eventually convinced her to join his label.

Since then her she’s been on fire. Her sophomore effort, Every Where Is Some Where, reached No. 1 on the Billboard Heatseekers chart. Singles like “Blood In The Cut” and “High Enough” boasts production value rendering the shiniest of songs, but her lyrics are filled with grit. And they’ve struck a chord with music fans.  In the spring, she had a sold-out North American tour, and with Outside Lands, K.Flay will kick off her new fall, arena tour.

Her lyrics give insight to the kind of artist she is; someone who writes her own material, forges her own path and does not get distracted with what she describes as “things that fall in the vanity department.”

She is also woke to social causes and recently got involved with Spotify’s I’m With The Banned campaign. It showcased artists in the U.S. showing solidarity with fellow musicians and producers from the six Muslim-majority banned countries.

We speak to K.Flay about returning to San Francisco to play the festival, hip-hop band Swet Shop Boys (who she is hoping to see), and working on the I’m With The Banned project.

Thank you for speaking to us. I know you are in the midst of so much touring. How has it been?

It’s been great. I feel like since we put out the EP in August, we’ve been on a continuous tour cycle. I feel like the past couple weeks of shows, we’ve started to really get into the swing of newer songs from the latest album, and reaching that point when we’re mastering them in the live shows. However, the past couple of shows, the weather has been fucking hot. We’re still in the South right now, and it feels like a heatwave. I’m glad that half of our political system is denying the existence of global warming; that’s comforting. (Sarcastically)

Speaking of the current political system, you took a stand against the President’s Muslim ban, getting involved with Spotify’s I’m With The Banned. Could you tell us why you were moved to participate in the project?

I know, internally, Spotify had wanted to put something like this together for some time. When my manager, who is also my best friend, heard about it, he knew I would be up for it. He said: “Here’s the concept. It will take place in Toronto.” When it worked with my tour schedule as well, it was a no-brainer. I feel like the more that any person, with whatever type of privilege, understands the context, and can do something about it, that’s a really good thing to do. Someone the other day asked me, “Why Toronto,” and this is reflective of how people don’t really think about these things. “Because they can’t come here, they can’t get into the U.S.,” I answered, “There’s a travel ban.” It is difficult to comprehend, if you are not directly affected. I collaborated with Kasra V. He’s a producer, DJ and host at NTS radio. Under the travel ban, he isn’t allowed into the States. I love collaboration anyway, but to be able to do it in a very tangible way and physically connect with something that’s happening now, that’s powerful.

Do you know Swet Shop Boys? They’re performing at Outside Lands too. Their music is powerful and politically-charged, taking on racial profiling and Islamophobia, through the experience of a brown-skinned person or someone of Indian descent.

I know of them. Are they playing on Sunday? We’re only there for one day; it’s a shame ‘cause my family is in the Bay Area.

Yes, they are playing on Sunday, too, actually.

Oh, cool, I might try and look out for them. I was connected with the dudes from Das Racist back in the day. Heems, who was in Das Racist, is now in Swet Shop Boys. He is an acquaintance; actually, I ran into him randomly, at a club in Tokyo recently, at 3 a.m. So I’ve heard a little bit about what they’re doing, and the few songs I have heard, I like. But I’m not familiar with the album. I do think it’s so cool that a lot of bands are getting super political, and explicitly so.

In “Blood in The Cut,” you sing, “Back up with the boy I love, cried on the streets of San Francisco,” I was wondering what’s your relationship with the city?

I grew up in Chicago ‘til I was 18. Then I went to Stanford and the Bay Area became my home. I have family in Oakland and Berkeley, so these were places I spent time over Christmas and summer holidays too. Chicago and the Midwest are my actual hometown, but the Bay Area, I like to say, is my musical hometown. It’s where I got into music in a big way and started performing—got to know people who run the venues. Live 105, the local radio station, has been hugely supportively of me from the very beginning. As for those lyrics, I did cry on the streets of San Francisco, by the Fillmore on Geary Street. And I wrote a lot in my parents’ basement in Oakland. It’s a character that keeps re-appearing in my songs.

You’ve mentioned “Blood In The Cut” was written at Christmas time, in your parents’ basement, which is “its own weird experience.” What did you mean by that?

I am a grown-up adult, but I am still my parents’ baby. They don’t treat me like one but it’s a relationship where I feel vulnerable and safe. And their basement was a very creative zone for me. I wrote maybe 50 songs there and was musically productive.

That’s not that weird...

That’s not that weird, but it was kind of a weird feeling sometimes, to write this super honest, personal stuff, and your parents are upstairs. And I’m like an angsty teenager but I’m not a teenager. I’m like, “What?” (Laughs)

You started out at Stanford trying to upend rap formulas, majoring in psychology and sociology. Did you know you had talents as a singer-songwriter? Did you have ambitions to pursue music?

No, literally the complete opposite. I did know that I could rap fast. I didn’t drink while I was at University, so I didn’t do beer pong, but my party trick was, I could speed-rap. In retrospect, the main thing that drew me to music and created this situation where I did not really care what people thought about me or being technically proficient is, I’ve always been marching to the beat of my own drum, in earnest, almost like a child. I had never sung before that. It was incredibly shocking to everyone, my family and those closest to me. I’m also one of the most regimented, controlled people; I really find solace in that state. Of course, I’ve picked a job that is complete chaos; and now my emotional stability is in disarray. God knows what I’ve done. (Laughs)

There is a noticeable shift in sound going from Life As A Dog to Every Where Is Some Where. Did you actively set out to do something different?

I didn’t consciously set out to make what turned out to be an alternative-rock record. But that was my headspace. Coming off my tour from Life As A Dog, even with all the rap, it was always more like a rock show; the way I dress and move. Then I started to feel, like, as a woman, where did all the edge go? I was listening to a lot of Garbage and Yeah Yeah Yeahs, Metric, PJ Harvey, getting in touch with this IDGAF attitude, and to sing in a way that’s not always palatable. I want to be incredibly loud but also be a woman. It’s this combination of rock music being this new frontier for me. I joke about this, but I only just got into Black Sabbath. (Laughs)The way the guitar is played, I’m like, “It’s so cool having a guitar tone like this!” Or even having a guitar up front. As I am getting better at playing the guitar, I feel what better way to express it all than with this instrument? Personally, I care about so many things but the things I really don’t care about, fall into the vanity department. A lot of that music, at least in my mind, fitted in with this mentality. ■

K.Flay's album, Every Where Is Some Where, is available on Apple Music and other retailers. Tickets for Outside Lands are on sale now.