Magic Giant on Debut Album, Need to Keep Their Heads Up 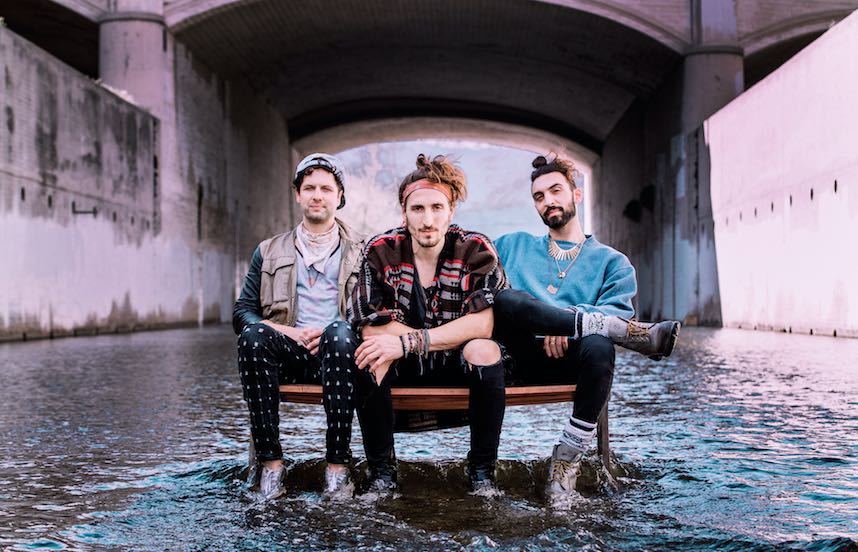 Photo of Magic Giant by Brantley-Gutierrez

Los Angeles trio Magic Giant chose to record on the road last year. Their schedule was booked with festivals that crisscrossed the country, so they couldn’t resist.

They kitted their van with solar panels so they could record in a field of daisies, on an airfield or inside a redwood tree. Their debut In the Wind dropped in May, and Variance spoke to them at the inaugural Arroyo Seco Weekend about how different touring is now.

“We’re currently on tour on the East Coast so it’s like flying to the home court gig,“ quips multi-instrumentalist and fiddler-extraordinaire, Zambricki Li, of the first major festival they have done in their hometown. “Lots of friends and family who can’t come on the road with us, but have always supported us, have been able to come and see us live here. For instance, Eric (Boulanger) from The Bakery, who mastered the record—we get to hang with him tonight. It’s special.”

“And I get to go home and sleep with my dog for one night,” adds Brian Zaghi, who plays the upright bass and guitar. When not on tour with the band, Zaghi is usually touring Europe as a much in-demand salsa dancer. When asked which is the better gig, being an international salsa dancer or part of an up-and-coming folk-pop band, he answers: “Magic Giant has a better rider, but as a salsa star I get my own room and don’t have to share a bunk.”

Magic Giant began five years ago when vocalist and songwriter Austin Bisnow met Li. They immediately struck up a friendship and started writing songs together. The band didn’t really take off until they stumbled on a social media post of Zaghi salsa dancing and invited him to join them. This visceral mix of salsa energy, folk-pop-electronica, man-buns and an eternal optimism translated into magic on stage.

“With last year’s tour, we were like, ‘Give us some time to record,’ while we are in between all these other festival gigs,” says Li. “We didn’t mind the downtime. This year, it’s been like, ‘Bring it on!’ Some days we’re doing three shows. We’ll do a morning drive-time show at a radio station, have some lunch, then maybe do TV in the afternoon … then a show at night.”

And they are having the time of their lives, especially as audiences get more familiar with their music. “That has to be the biggest difference, that the album came out a month ago and now everybody knows all the lyrics, the bridges and chorus. Before it was like, a bit of the choruses and the rest was just the audience mouthing it … watermelon, watermelon, watermelon…” says Li, laughing with the others.

Bisnow, who has co-written with John Legend and David Guetta, adds: “The album was our story, but people have listened to it since and lived it a little; there’s a shared story there now.” The album will find favor with fans of folk-popsters such as Edward Sharpe And The Magnetic Zeros, The Lumineers and Mumford & Sons.

And lest you think banjos might have had their day in the sun, or that drum circles are best left to the hippie-set, Bisnow’s’ considerable writing chops and the trio’s earnest joie de vivre are inescapable and will win you over. Songs like “Celebrate The Reckless” and “Set On Fire” are infectiously anthemic, but when they pull back from the electro-folk playbook, for the strip-back piano-led ballad “Great Divide,” they prove they can move mountains with nary a dance step.

With all this sunny optimism, however, does anything get them down? “I feel like I have some darkness from my childhood,” said Li, taking a serious tone. At 13, he was in an accident that caused him some brain injury and put him in a coma. “I’m fighting it,” he added, “I’m going to drown it in light.”

For a moment, Bisnow loses the smile that seems to perpetually light up his face. “My grandma is not doing very well,” he says. “There are mothers and fathers everywhere dying. The specifics are not as relevant but there is a lot that’s always getting us down. The world is just gnarly; we have to stay positive.”

Magic Giant's debut album In the Wind is out now. See their upcoming tour dates below.