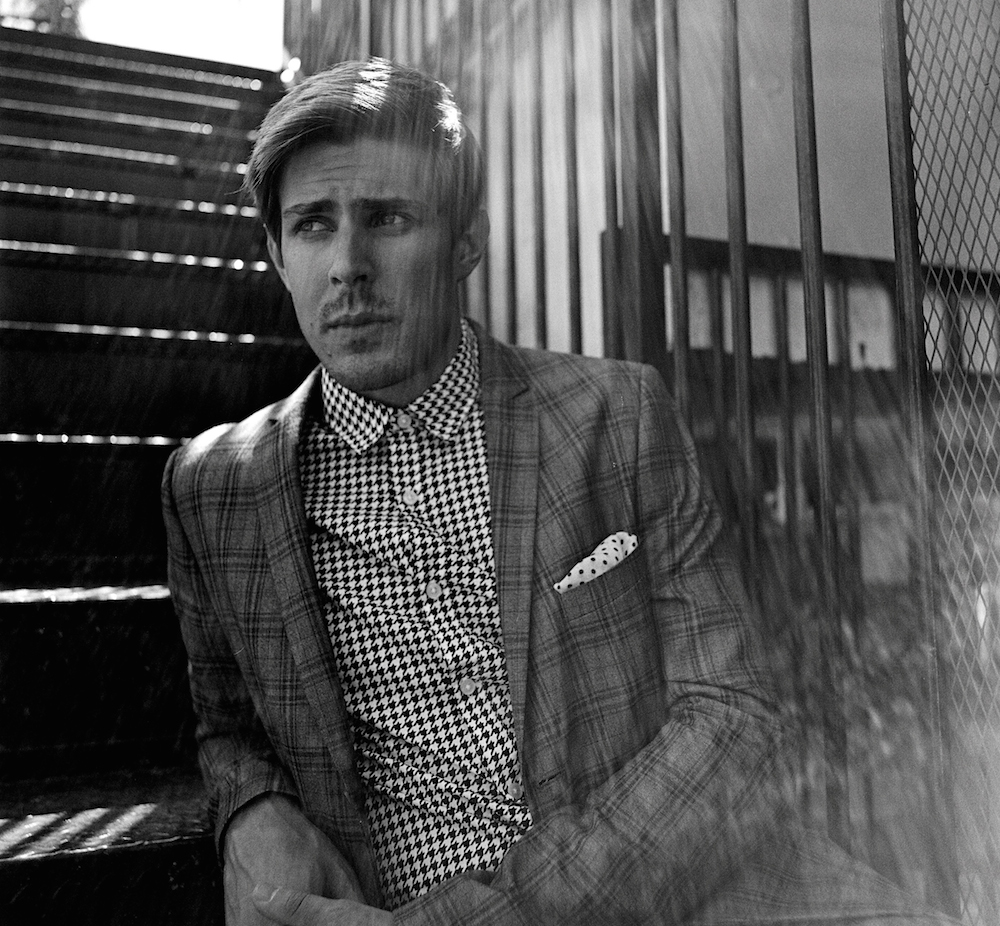 It’s a late summer afternoon and Chris Lowell is sitting on the roof of his apartment building overlooking Manhattan. Most everyone else is getting ready for the weekend on this Friday, but Lowell has just gotten out of rehearsal for his Off-Broadway play, Jacuzzi. So he’s taking a moment to relax.

Anyone who claims you should only follow one passion in life to find success clearly hasn’t met this guy. Perhaps best known as Piz on Veronica Mars or as Emma Stone’s love interest in The Help, Lowell revived Piz earlier this year for the Kickstarter-funded, film version of the show. He’s also making his directorial debut in the upcoming dark-comedy, Beside Still Waters, which he co-wrote and produced.

Even the one sour note in his hectic year wasn’t all that terrible. He had a lead role in the short-lived and underrated Fox comedy Enlisted, which developed a devoted fan base in a small amount of time. Unfortunately, it didn’t catch on with mainstream audiences.

“It really was down to the wire. It was down to the bitter end,” he divulges. “Even when the show had been canceled unofficially and then officially, there just never seemed to be a break. It was such a great group of people, the cast, the writers, the producers. It was just something you can’t fabricate. I remember the first time Geoff [Stults], Parker [Young] and I got together, and it was quickly evident we had almost a frightening connection.”

From Lowell’s perspective, the show was never truly given a chance to thrive. And it became increasingly evident the network wasn’t going to fight to keep it going.

“I don’t take it personally at all,” he says assuredly. “But I think we all kind of started looking ahead to the next project once we got such a death knell time slot. We weren’t given much of a chance to begin with, so when you’re not even given a shot at developing a viewership because you have such a shitty time slot and our episodes aired out of order … everyone has to start latching on to other jobs.”

Fortunately, the Atlanta native has had enough to keep him busy over the past few months as he dove back into theatre and prepared to release Beside Still Waters, both with the support of his “buddy” Emma Stone.

“When I say kissing her in The Help was like kissing my sister, people think I’m weird,” he confesses. “I get it, but Emma is one of my best friends. We lived together when we shot the film and she’s just one of the greatest people in the world, and she and I have been super great friends. She acted in our very first table read for Beside Still Waters, which we did at my house in Lakemont, Georgia. She supported us when we did the Kickstarter campaign for the film. And now with the play, she’s about to take over for Michelle Williams in Cabaret, so she’s literally two blocks away from our show. So I’m thrilled we’ll be close by again. It’s nice to have good people like that in your life in this business.”

Although Lowell has established a clear knack comedy—he’s also joking throughout our interview—Beside Still Waters presents a totally different side of the actor, who doesn’t even appear on screen. Yet the entire film, which he says is a love letter to his hometown, is covered with his fingerprints.

Starring The Blacklist’s Ryan Eggold, Agents of S.H.I.E.L.D.’s Brett Dalton and Saturday Night Live’s Beck Bennett among an ensemble cast, the movie centers around Eggold’s character, who’s grieving his parents’ recent death and reunites with his group of childhood friends for one final weekend together in his childhood home before he sells it.

“It is extraordinarily personal,” Lowell admits. “I don’t think I knew any better when I was making it, not to make it too personal. I started writing the film with one of my best friends [Mohit Narang] when we were at our family’s lake house in North Georgia, and we started writing about the things we were afraid of—losing this place, these friendships, our parents.

“It began as this very light fiction for us and then in this sort of tragic irony, shortly thereafter, my folks ended up selling the house and moving away. And then several of our friends’ parents started getting sick. And what began as total fiction suddenly became a much more personal and much more important story for us to tell.”

As difficult as it was, Lowell says it was also important to him and Narang to be able to tell the story in their own voices, something of a rarity for first-time filmmakers. To raise funds to produce the project themselves, Lowell says they “did it the old-fashioned way, going into people’s living rooms and laying out a very simple business plan, asking friends and family to support it.”

They then turned to Kickstarter to complete the last round of funding, something he admits he was reluctant to do: “Everything I do is very old school,” he says, laughing. “I really had to give myself a crash course on all of that shit to launch the campaign. But I think because we poured our hearts and souls into it and we were so personal with the campaign, it ended up becoming so radically successful and opened my eyes to what someone is capable of accomplishing with social media.”

Another eye-opener comes in the form of Bennett’s stunning performance. Yes, the guy from the AT&T commercials, improv groups and now SNL kind of steals the show with some truly emotional scenes and what Lowell refers to as “very coy humor.”

Bennett and Lowell were actually freshman roommates in college and have remained best friends since. And as Lowell puts it, “his talent is just unprecedented,” he declares. “He was in my first student film at USC and just about everything I’ve made since, so it was only right that he be in my first film. But everybody knows Beck as this larger-than-life, goofy comedy guy. I feel privileged to be able to expose some of the depth of his talent.”

With plenty on his plate, the newly 30-year-old also manages to make time for photography. Lowell’s work includes non-profit projects focusing on rural Haiti, Uganda and Rwanda, as well as the Elton John Collection. And somewhere in his downtime he’s starting to work on his next script.

As for his current one, which releases in November, Lowell says he hopes that “people finish watching the film and it reminds them of their old friends and their memories. My goal was that when it ends, you’d immediately call an old friend like, ‘Hey, let’s go grab a beer and catch up.’ I think we all need that sometimes.”

Jacuzzi runs every night now through Nov. 15 at Ars Nova in New York and Tribeca Film will release Beside Still Waters on Nov. 14 with a DVD release on Nov. 18.