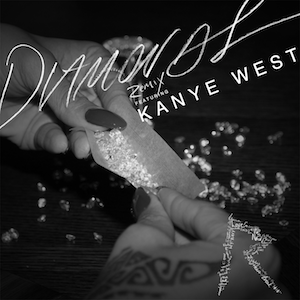 Just in time for the weekend, Def Jam Records has released a remix version of Rihanna's "Diamonds," the lead single to her seventh album (yeah, seriously) Unapologetic, which releases on Monday. The new version features none other than Kanye West at the track's opening, unloading for nearly two straight minutes. Ye samples The Fresh Prince of Bel-Air before also giving a shout out to the east coast for enduring superstorm Sandy.

As we previously reported, West is slated to perform at the 12.12.12 Sandy Relief Concert.

Listen to the "Diamonds" remix below. It is also available for purchase via iTunes.