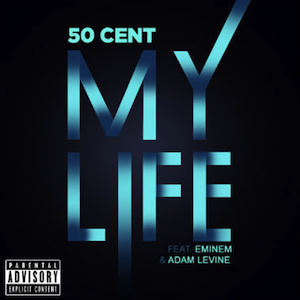 50 Cent has fans anxiously waiting for his next single "My Life," which is due Tuesday, but until then, a 30-second clip is now available. The new track features Eminem and Adam Levine (seriously). The artwork is seen left, with a corresponding video—already shot in Detroit by director Rich Lee—to be released soon.

Fans of Marshall Mathers will have to wait a little longer, as this audio preview doesn't really showcase the rapper's vocals. As for 50's new LP, it is supposed to see an early 2013 release.

UPDATE (11/26): The censored (and annoyingly so) version of the song has made its way to the Web. Until the full cut releases, listen to the radio version (in place of the 30-second sample in our original post), which premiered on Monday in select markets.

50 Cent and Adam Levine will also premiere the song on NBC's The Voice Monday night, the network has confirmed.

Listen to censored version below:

Watch the trailer for the video below: