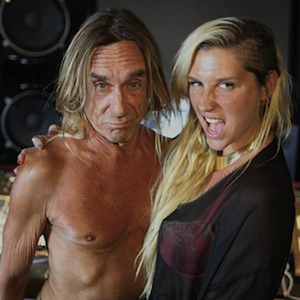 The rebranding of Ke$ha continues. It's true, it's true. With new collaborations that include The Flaming Lips, fun.'s Nate Ruess, Ben Folds Five and The Black Keys' Patrick Carney, we're definitely seeing a different artist emerge ahead of her upcoming Warrior release. Ruess co-wrote her hit "Die Young," which is on its way to No. 1 (currently No. 3) and Carney co-wrote "Love Into the Light," which also appears on the new album, along with contributions by Sia, Calvin Harris and the Dust Brothers (Beck, Beastie Boys).

Although most of her collaborators received only writing credits, Iggy Pop lends his vocals in "Dirty Love," the latest track to make its way online. While the lyrics are disturbing in parts, it's still rather noteworthy to hear the 65-year-old legend offering his voice for Ke$ha's new LP.

Listen to "Dirty Love" below: