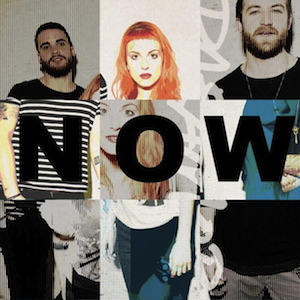 Frontwoman Hayley Williams certainly channels Gwen Stefani in this new single, it has a certain familiar Paramore vibe, perhaps suggesting the band is getting back to the sounds that made them a staple act. Williams recently assured fans that, although she and her bandmates (bassist Jeremy Davis and guitarist Taylor York) broadened their playlists while creating the new album, there would be no surprise "dubstep was jammed in the making of this album."

She did, however, reveal what they were listening to: "I'd be lying if I said we didn't collectively listen to more electronic music during this process than ever before ... Taylor was listening to Alt-J a lot, I was listening to that Sirius XM channel called '1st Wave' everyday just getting my gothy vibes on in the car, and Jeremy keeps us well versed in new hip-hop."

Listen to the new single below, followed by the tracklist for Paramore: