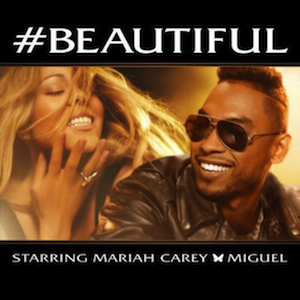 Mariah Carey may just have another fresh hit on her hands. After her recent spat on American Idol with Nicki Minaj over No. 1s on the Billboard Hot 100, it appears the R&B queen isn't done cranking out winners, as she debuts on Monday a new collaboration with beloved crooner Miguel. "#Beautiful," a shiny new cut reportedly from Carey's forthcoming album, offers a perfect hook for radio and the flawless vocals one would expect from this duo.

Following a very lackluster offering last summer with "Triumphant," featuring Rick Ross and Meek Mill, this new track presents plenty of sunshine for what is likely a candidate for this year's Song of Summer. The official video will premiere May 8 on Idol.

It's also worth noting the hashtag in the song's title, given Ms. Carey's recent "hashtag pow" obsession.