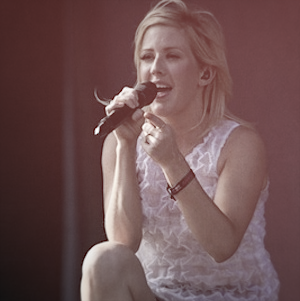 Ahead of her forthcoming album re-release, Halcyon Days, Ellie Goulding has unleashed another track, this time a dazzling ballad titled "Hearts Without Chains."

Goulding co-wrote the new cut with Fraser T Smith, the British songwriter-producer who wrote Adele's mega-hit "Set Fire to the Rain." The track appears alongside her latest single, "Burn," her cover of Alt-J's "Tessellate" and others. A total of 10 new songs appear in the re-issue, which is pretty much the sum of a new album.

The set arrives on Aug. 27 via Polydor/Interscope.

Listen to "Hearts Without Chains" below: