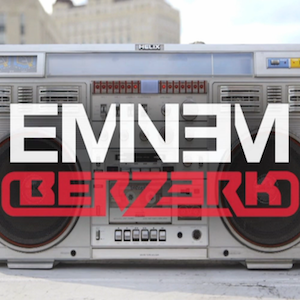 Only more than 24 hours after announcing a release date for his next record, Eminem has debuted the set's first single titled "Berzerk."

In a Beats by Dre commercial during the MTV VMAs, the Detroit rapper confirmed his new album, Marshall Mathers LP 2, will arrive Nov. 5. It is executive produced by Rick Rubin and Dr. Dre.

The news follows the debut of Em's "Survivor," which was included on the new Call of Duty: Ghost trailer.

"Berzerk," a very Beastie Boys-inspired new cut, premiered late Monday night on his SiriusXM satellite radio station, Shady 45. It will be available on iTunes as of 12:01 a.m. EST. Take a listen below: