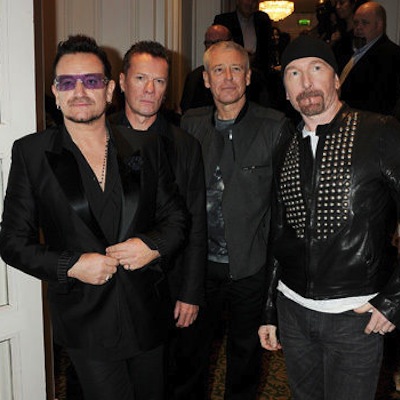 Following news that U2 is almost finished with its next album, one of the band's new songs, "Ordinary Love," can now be heard in the form of a trailer for Mandela: Long Walk to Freedom, an upcoming Nelson Mandela biopic.

The song, which is the band's first new material in three years, was written specifically for the film, which stars Idris Elba as Mandela.

As we previously reported, bassist Adam Clayton revealed in a recent interview that he expects the band to be finished with their latest effort—a 12-song LP, produced by Danger Mouse—within the next month.

"We’re trying to get these 12 songs absolutely right and get them finished by the end of November, and then we can kind of enjoy Christmas," Clayton said of the new LP, which he described as "a bit of a return to U2 of old, but with the maturity, if you like, of the U2 of the last 10 years ... It’s a combination of those two things and it’s a really interesting hybrid."

Watch the trailer below: