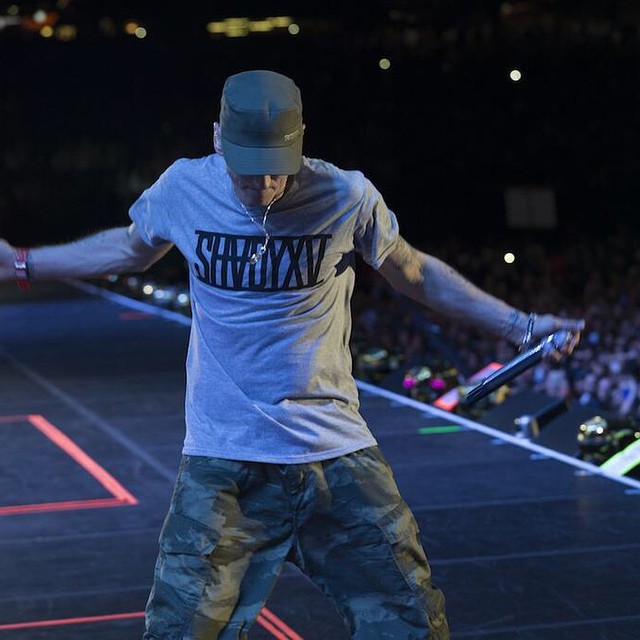 Another MTV VMAs, another big night for Eminem.

The rapper, who announced last year's The Marshall Mathers LP 2 a year ago during the VMAs, is using this year's telecast to launch his new Sia collaboration "Guts Over Fear," which is featured in the forthcoming film, The Equalizer, starring Denzel Washington.

The song will be available on iTunes as of late Sunday night.

Eminem is also expected to include "Guts" on a new compilation album, Shady XV, due on Black Friday. "XV" (the Roman number for 15) has been used subtly over the past few weeks to reference the 15th anniversary of Em's major label debut album, 1999's The Slim Shady LP.

In the latest teaser (seen below) for Equalizer, the clip closes with the following text on screen: "Featuring the new song Eminem feat. Sia 'Guts Over Fear' from Shady XV - Black Friday."

Update (Aug. 25, 8:30 a.m. ET): A press release Monday morning confirms the two-disc compilation album will include Eminem and Shady Records' greatest hits (i.e. 50 Cent’s “In Da Club” and Eminem’s “Lose Yourself”) on the first CD and new material from Eminem, Slaughterhouse, Bad Meets Evil, Yelawolf and on the second disc. A rep for Eminem also says the album will be released on Nov. 24 (not technically Black Friday, Nov. 28).