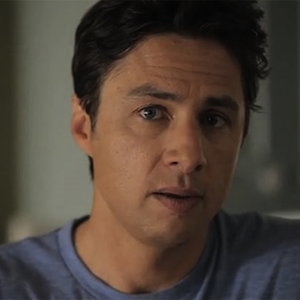 Following in the footsteps of the recent successful Kickstarter campaign for the Veronica Mars film, Zach Braff on Wednesday launched his own Kickstarter for a new film he wishes to direct and star in. The actor previously made his directorial debut in 2004's critically acclaimed Garden State, which was made on a $2.5 million budget.

Despite having top-tier indie producers Stacey Sher and Michael Shamberg onboard as executive producers (they previously held similar roles behind films such as Pulp Fiction, Django Unchained, Get Shorty and Out Of Sight), Braff has been unable to generate enough financial backing to make his new dream project, Wish I Was Here, a reality. His hope is to raise $2 million via Kickstarter and an additional $3 million through foreign pre-sales.

Of course, as these celebrity-backed "grassroots" fundraising campaigns become more common, the bigger question is whether they are completely fair (as Deadline puts it, "donors are promised tchotchkes, but none of the upside in success.") But that's for a different time! For now, this is another powerful testament to the strength of the Internet, social media and crowdfunding.

UPDATE: In only about 12 hours, Braff's project has raised more than $1.1 million, passing the halfway mark. If you watch his Kickstarter page, you can literally see the total funded amount increase every few seconds. The campaign still has 29 days to go. Braff has himself acknowledged the quick response from fans, tweeting, "I am speechless. From the bottom of my heart, thank you."

UPDATE (4.27): Braff's Kickstarter reached its $2 million goal early Saturday. The actor tweeted, thanking supporters: "28,000 Financiers in 3 days! Un-f-cking I will not let you down. Let's go make a killer movie!" With 26 days to go, the project is likely to continue raising funds.

UPDATE (5.24): And on the 30th day, Zach Braff's final tally is in. As of May 24, the final day of the Kickstarter campaign, Braff has raised more than $3.1 million. "Thank you, thank you, thank you. I won't let you down! Lets do this," the actor tweeted on Friday following the close of the campaign.

Kate Hudson, Mandy Patinkin and Josh Gad will join Braff in the film about a thirtysomething actor who is trying to figure out who he is. The former Scrubs star co-wrote the screenplay for Wish I Was Here with his brother and will direct the film. Stacey Sher and Michael Shamberg are producing the pic through their Double Feature Films. Worldview Entertainment has stepped in to provide gap financing for the film.