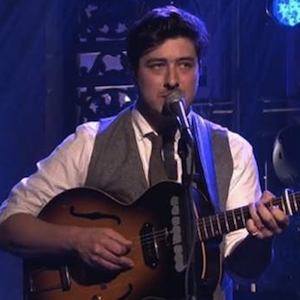 Ahead of Tuesday's release of Babel, Mumford and Sons' sophomore album, the band performed on this weekend's edition of Saturday Night Live. Although the rest of the show was pretty sour, the English folk rock foursome still shined. They performed "I Will Wait" and "Below My Feet," both from the forthcoming album. For the first song, they were joined by a brass section.

The band were featured in one of the sketches as a Beatles cover band called Hey Dude. At the end of the sketch -- which starred host Joseph Gordon-Levitt and cast members Jason Sudeikis, Bill Hader and Kenan Thompson -- Mumford and Sons led the crowd and cast in a singalong of The Beatles' hit song "You've Got To Hide Your Love Away." (Video of this sketch is not properly available online due to music rights.)

Enter to win a copy of Babel here. Watch the official video for "I Will Wait" here.

Watch video of "I Will Wait" and "Below My Feet"...below: