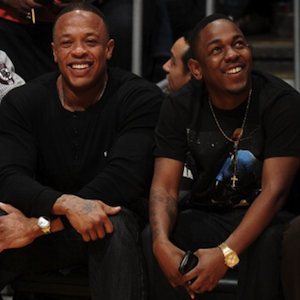 Kendrick Lamar is only days away from his major label debut, good kid m.A.A.d city, which releases Oct. 22 via Top Dawg/Aftermath/Interscope. During a hometown show at L.A.'s Club Nokia Wednesday night, Aftermath founder and Lamar's industry mentor Dr. Dre made a surprise appearance to perform "Compton" and "The Recipe" with the west coast rapper.

Between tracks, Dr. Dre took a break from spitting verses to sing Lamar's praises, calling him a "true motherf---ing lyricist ... a real motherf---ing MC." As the crowd revved up, Dre still had more to say about the young artist. "That's what we need back in this hip-hop s---," he continued. "That's why we're here, hip-hop in its purest form, and Kendrick Lamar, that's what it is."

Watch fan footage of the two rappers performing together: