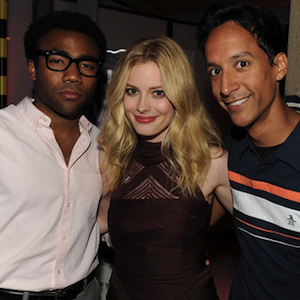 UPDATE (Oct. 19)
"Happy October 19th!" declares the cast of Community in a new video marking what was supposed to be long-awaited return of the comedy series. For now, Donald Glover (Troy) and Danny Pudi (Abed) do their best to help explain the increasing delay and make light of the situation. Watch the video below. For now, it will have to do.

NBC announced Thursday that failing comedy Animal Practice will be replaced starting Nov. 14 by Whitney, which was previously slated to premiere on Friday, Oct. 19 alongside Community. Freshman Practice scored well with its preview during the Olympics, but fell quickly and has not gained any ground since.

Earlier this month, the network halted the scheduled premieres of Whitney and Community. For now, the latter has yet to receive a concrete return date, something star Joel McHale noted Wednesday on Jimmy Kimmel Live. The actor had originally been scheduled to promote his show's season premiere, but he opted to appear anyway and discuss the complications surrounding Season 4.

"You know when an old person dies? And they go, 'they died but it's a good thing,'" McHale said of NBC brass informing the cast about Community's longer-than-expected hiatus. "And that's how they kind of explained it....and it is good because they said 'we're going to promote you when you come back.' But we don't know when that is. But I think our halloween episode is going to be awesome in February."

While the Peacock has not formally set a return date for the comedy series, it's unlikely fans will have to wait as long as February, with current speculation hinting that Community may eventually replace one of the network's other shows earlier in the week.

Watch Troy (Donald Glover) and Abed (Danny Pudi) explain the meaning of "October 19th" along with the rest of the cast:

Watch a clip of season 4 and part of McHale's Jimmy Kimmel interview below: