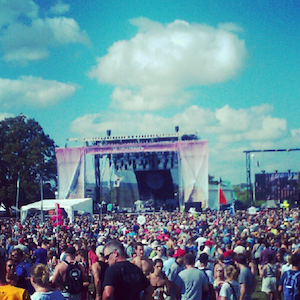 FRIDAY (Day One)
First up on our schedule were Colorfeels and First Aid Kit -- the Nashville-based indie group and Swedish-born sister duo, respectively. Both groups gave incredible performances before Ben Howard -- who was recently featured as Variance's "Ear Candy" selection -- dominated the Honda stage. We were honestly surprised to see such an enormous crowd absolutely enthralled with the British singer-songwriter, who recently stopped by Jimmy Kimmel Live to perform his latest single "Only Love." Grammy-winner Esperanza Spalding followed with that sultry voice. Fans watched as she passionately charmed the audience with soulful lyrics and an incredible talent for maintaining vocals and playing bass simultaneously. It's unreal (see video).

Next, we joined a large flock making the trek from across the park to the Bud Light stage for Tegan and Sara, the sister indie-rock duo, whose new album Heartthrob releases in January (they will be featured in our January issue as well). There were easily more than 30,000 people there to watch the Canadian-born band, which has been laying low until recently. We've followed their music for years, but these two definitely sound flawless live. Unfortunately, we were only able to catch a portion of readers' favorite Alabama Shakes before heading over to see Florence Welch and her Machine.

Where to even start on Florence? For one, it was crazy humid and she still elected to don a long-sleeved costume-like dress. Bravo for braving the heat and dancing around the stage like it was early springtime. Before a massive crowd at one of the main headline stages, Welch fluttered around while giving one powerful performance. Between songs, she encouraged those in the audience to "embrace each other" and show affection during her set. At times, she used flowery language to converse with the audience, and other times, she showed off her darker, more mystical side -- something she seems to be embracing more lately. Over the course of an hour, Welch flowed through a stacked set of her most popular songs, of course saving "Dog Days Are Over" for last. By this point, the crowd was completely under her spell and chanting every word of the infectious chorus. Beautiful show.

As dusk fell over Zilker Park, M83 was set to take over the Barton Springs stage. Compared to many of the other shows on this day, the crowd seemed to be full of many fairly devoted fans, many of them congregating way before the band was even due to perform. Frontman Anthony Gonzalez greeted the crowd enthusiastically following the obvious opener "Intro," noting that they first appeared at Austin City Limits seven years ago as a little-known act. Having endured several years of obscurity to reach a point this past year where they have stepped into significant prominence, there was definitely a good vibe watching them conquer their set, playing many fan favorites such as "Reunion," "Teen Angst," "Steven McQueen" and "Midnight City." Between lights creating shimmering silhouettes and glorious echoes coming from the crowd, Anthony & Co. gave off pure energy -- and the crowd just kept giving it back. It was certainly one of the finer performances of the weekend.

Watch footage of The Black Keys performing the final show of the night.