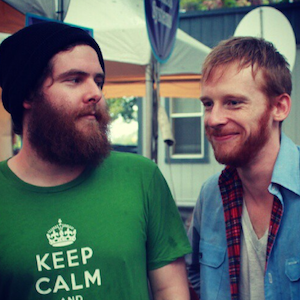 Andy Hull (of Manchester Orchestra) and Kevin Devine made a stop at this year's Austin City Limits Music Festival to perform as their new act Bad Books. We caught up with them before their set to discuss their relationship with each other as musicians and friends, and how they came together to form the group. Devine, who has successfully toured solo prior to Bad Books, also revealed the identity of his No. 1 fan.

Hull and Devine met back in early 2007, and immediately something clicked, as Hull describes: "You know, you just meet people in your life that you realize you're going to be close friends with." It wasn't long until Devine was invited to tour with Manchester Orchestra, and while they were both on the road, the pair worked together and wrote songs. The continuous collaborations led to creation of Bad Books.

According to Hull, it's rare that musicians actually get to do what they're doing. "I think that happens a lot with a lot of musicians, but none of them take the leap to ... make a record together."

Juggling between bands may seem difficult -- and fans, no doubt, wonder about the future, but they have a system figured out. Hull explains: "Basically you just do it on opposite record cycles."

If Bad Books were to become their No. 1 focus, would they be upset? According to both guys, they'd actually be pretty happy if things did turn out that way. Their new album II is currently available.

Watch the video below for more: