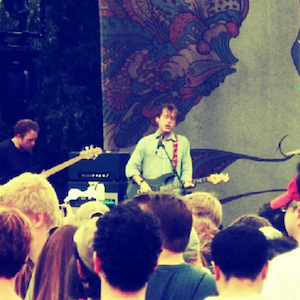 The day opened with sets from Quiet Company and Caveman, smaller bands who are both gaining momentum as of late. Caveman, specifically, had a busy weekend, performing multiple times that day with appearances at the Xbox Lounge for press later that night. Unfortunately, as Civil Twilight took the stage, looming rain became more certain. Prior to the Festival's start, weather was already a topic of discussion (it rained Thursday night as we were arriving in Austin). But Civil Twilight -- natives of South Africa, who were featured earlier this year in Variance -- played on, and gave Austin a wonderful, lively show. Clouds turned to light rain as Dev opened with her hit "Bass Down Low" before a noticeably younger audience. Despite only casually dubbing vocals over her tracks, she probably had one of the most engaged crowds all weekend. Her energy was certainly not lacking, and at times the audience came close to matching her volume as they knew every lyric to her songs, such as "In The Dark" and Far East Movement's "Like A G6," a song on which she was featured.

Another readers' favorite Bombay Bicycle Club also played gave a solid performance, but it was the legendary Rufus Wainwright who absolutely captured out attention. In addition to a set full of favorites, the pop-opera singer showed a wide range in genres, even performing some of his musical parents' songs. Wainwright, who is a well-known political activist and self-proclaimed "Libertarian" aside from his music, did take a moment to comment on the pending election and social issues between sets, briefly advising the crowd to vote for Barack Obama because -- in his opinion -- women's rights are the defining issue of the 2012 cycle. This was by far one of the best sets of the weekend, and the sun showed up for part of his time onstage. (We were scheduled to interview him afterward, but weather prevented.)

Next up, Canada's indie-rock group Metric lit up the stage with an exquisite performance. The crowd showed non-stop excitement from the first moment the Emily Haines-fronted band stepped out onstage. It was obvious many folks had been waiting a while for this show, and the band certainly delivered. Backstage that afternoon, New Zealander Kimbra informed us that she would be making a surprise appearance that night with Gotye (interview forthcoming). Heavy rain downpours created an interesting scenario as The Roots and The Shins performed. The latter's James Mercer wasn't phased much, and despite some complaints, the crowd didn't mind much. They were watching The Shins!

Saturday evening, our April cover story Gotye brought in one of the largest crowds of the day. Although an extremely talented musician and someone who evidently puts so much hard work into his music, it was increasingly obvious as his set went on that many in the audience were unfamiliar with most of his music. (They were waiting for one song in particular.) Regardless, Wally De Backer gave a stellar performance. But as he progressed through "Seven Hours With A Backseat Driver" and "Dig Your Own Hole," the crowd began to stir with building excitement, then roaring as he brought out Kimbra to give a rare live performance of their hit song together. Surprisingly, "Somebody That I Used to Know" seemed to fly by, and then it was over. Jack White closed out the night on the main stage.

Finally, we headed downtown to Austin Music Hall for one the ACL Aftershows starring The Weeknd, a major readers' favorite. One of the year's hottest rising stars, Canadian R&B singer-producer Abel Tesfaye has worked his way up as an indie artist. When we spoke exclusively last year with Universal Republic's Director of A&R Ben Adelson, he had The Weeknd at the top of his wish list of signees, acknowledging that every label wanted him. In September, the artist announced he was finally signing with a label: Universal Republic. Watching fans line up outside the Music Hall -- wrapping around the building and stretching across the nearby Lady Bird Lake, it was remarkable to see how far Tesfaye has come. And the welcome he received from them reflected nothing short of electric. Although he arrived more than an hour late, fans pressed on. A DJ kept most attendees somewhat engaged until Tesfaye and his band finally took the stage. The crowd went wild as the lights dimmed, and their favorite singer began an intimate set. He hardly spoke between songs, occasionally muttering a "Thanks, Austin," but he was otherwise there to perform, and that he did. One song we waited for was The Weeknd's Michael Jackson nod "D.D. (Dirty Diana)," but it never came. While Tesfaye kept the crowd going well past 1 a.m., the next morning it was announced that Tesfaye was ill and would not be able to perform his Sunday set at ACL (during the main festival). Guess we lucked out.