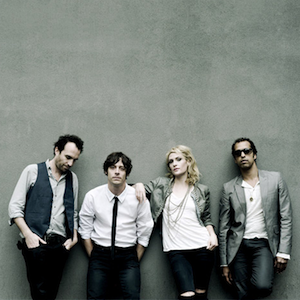 Metric has premiered the visuals for their latest single "Breathing Underwater." The video is accompanied by a SoundCloud set featuring three versions of the song: the original album version of the song, the Synthetica Reflections version and an acoustic version.

The acoustic "Breathing Underwater" will be the first taste of the five extra songs on Synthetica Deluxe, being released digitally Nov. 20 and physically Dec. 4. The other all-acoustic bonus tracks are versions of "Youth Without Youth" and the album's title track plus "Gimme Sympathy" from the band's previous Fantasies and a rarely heard cover of Tom Waits' "Strange Weather."

The video -- which can be seen below -- features some fancy footage of the band performing across the U.S., including noteworthy stops at this year's Lollapalooza and Austin City Limits Music Festival.

The band will wrap up 2012 will a handful of tour dates, as seen below.