WATCH: The Killers Bring In Mannequins For 'Here With Me' Video 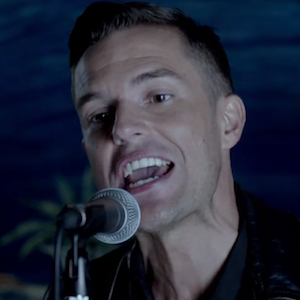 Following the release of their video earlier this week for "Miss Atomic Bomb," The Killers have wasted no time in cranking out another set of visuals. In this newest video for "Here With Me," the band is seen performing in an empty grand performance hall between creepy sequences of a man falling in love with a wax mannequin, one which occasionally comes to life to love him back.

While odd from the first look, it's The Killers doing what they do best with their videos. All the strange, flamboyant details are usually part of a deeper story they wish to tell. It's a good video, but fans who enjoyed the "Miss Atomic Bomb" video may be divided on this one.

The video was directed by Tim Burton and stars Winona Ryder.