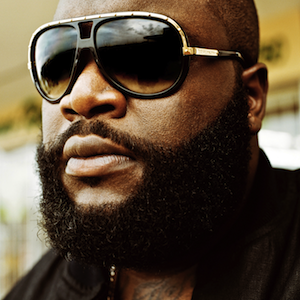 Rick Ross started a new week with some great news, sharing his new album title by way of a swanky new video. The Maybach Music head—whose last album, God Forgives, I Don't, released only last summer—has appropriately named this new project Mastermind. In a teaser for the new set, Ross flaunts cash, jewelry and a beautiful home surrounded by palm trees, while enlisting the help of a beautiful woman and a baby mountain lion to make his big announcement.

Exactly a year ago this week, Ross released a mixtape titled Rich Forever to promote his then-forthcoming 2012 LP, which debuted in July at No. 1 on Billboard. Perhaps he's hoping history repeats itself in 2013.

The rapper also revealed on Monday a few visuals from his upcoming acting debut. He will appear as "the Bolita boss" in the second season of Starz's Miami gangster drama, Magic City. "God is good, until he ain't," Ross proclaims in a newly released trailer, before unveiling a shotgun in the middle of a crowded street.

No release date has been set for Mastermind.