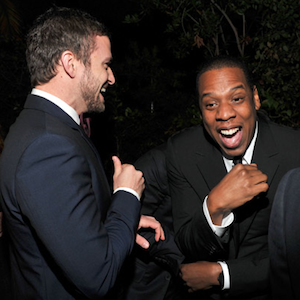 Rumors of Justin Timberlake's return to the music scene have been swirling for months, although the singer-turned-actor has frequently extinguished any further musical aspirations, claiming (and rightfully so) that it is very demanding. But now, it seems, things are suddenly taking shape. Florida radio station 97.9 first suggested that Timberlake would release a new single featuring Jay-Z this Monday (Jan. 14).

We had previously learned that JT was also said to be in the studio with Jay's wife Beyoncé.

Timberlake's last studio effort, the enduring FutureSex/LoveSounds, came out in 2006 and has been certified four-times platinum, with U.S. sales of over 4 million units.

Following Timberlake's announcement, producer Timbaland tweeted: "i told y'all the storm is coming this year." Timbaland has reportedly produced an entire new album by Timberlake. The duo is said to have produced about 20 tracks together.