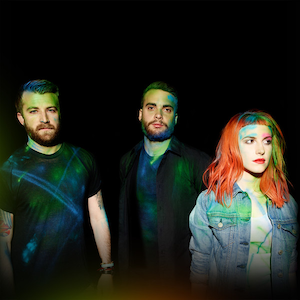 Paramore stopped by BBC Radio 1's Live Lounge this week to promote their upcoming self-titled fourth album, which arrives April 9 via Fueled by Ramen. While there, they performed "Still Into You" and "Hate to See Your Heart Break," both off the new record—the latter of which they performed for the first time for the general public. They also covered "Matilda" by Alt-J, whose star continues to rise this year.

Although the Alt-J cover may be surprising for some, we previously reported that the Hayley Williams-fronted trio is really fond of the English quartet. According to Williams, bandmate Taylor York's appreciation for the band and their heightened love for electronic music influenced the making of the new album.

BBC and the Live Lounge aren't exactly unfamiliar territory for Williams either. In 2010, she covered Kings of Leon's "Use Somebody." Just last year, she joined fun.'s Nate Ruess on the show to cover Gotye's "Somebody That I Used to Know."

Watch both the Paramore (starts around 3:30 in the video) and Alt-J versions below.