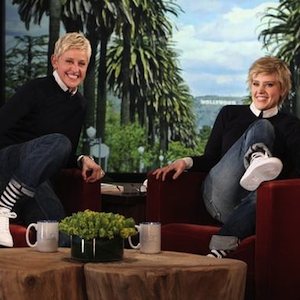 One of the greatest things to happen this past year to Saturday Night Live was the addition of featured player Kate McKinnon. In the past 12 months since her debut, she has offered brilliant portrayals of Olya, a Russian woman who witnessed February's meteor; Scarlett Johansson; Ann Romney; The Voice coach, Shakira; Jodie Foster and others. But perhaps her most well-known impersonation to date would be her hilarious take on Ellen DeGeneres. After months of parodying the comedienne/talk show host, McKinnon finally stopped by this week to meet Degeneres in person. Hilarity ensued, naturally.

"It's been such a journey. I'm trying not to cry because I have loved you my whole life, truly," McKinnon admitted to DeGeneres during her first appearance on the show—and her first press interview outside of NBC promo bits. "My mother has come up with schemes to try to meet you. I used to paint, I was an oil painter, and she would always say, 'If you would just paint a portrait of Ellen and send it to her, I'm sure that she would have you as a guest on the show. I don't know why you don't just paint a portrait.' I never did and I don't know why. I guess it's because I was meant to appear in a different capacity on the show."

Take a look at the clip below to see just a glimpse of why McKinnon is one of the most promising players currently part of the SNL ensemble.