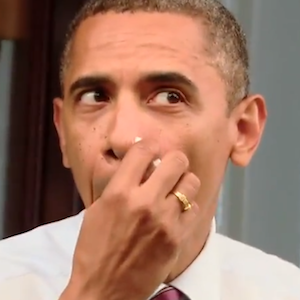 Obama entered to DJ Khaled's "All I Do Is Win," before jumping right in and clarifying his stance on Jay-Z and Beyoncé's recent trip to Cuba, stating: "It’s unbelievable. I’ve got 99 problems and now Jay-Z is one.” (seen below at 4:10 mark)

Some of the jokes went over very well, but some—despite being pretty funny—didn't quite resonate with the crowd, which consisted of media personalities and execs, journalists, politicians and celebrities. For example, the President offered his thoughts on the much-publicized sequester fight between the White House and Congress: "Republicans fell in love with this thing, and now they can't stop talking about how much they hate it. It's like we're trapped in a Taylor Swift album." Cameras quickly caught New Jersey Governor Chris Christie looking rather disappointed (perhaps Christie is a Swiftie?). In his defense, Ariana Huffington was sitting next to him, and she didn't appear to be more than slightly amused herself. (seen below at 13:30 mark)

Despite the laughs, the President eventually veered to acknowledge those recovering in Boston and West, Texas, as well as the Midwest, which has been experiencing record-breaking weather. He praised journalists' efforts in the midst of the recent tragedies, and he saluted first responders and U.S. citizens who rushed to aid those in need. He closed by encouraging the media, entertainers and politicians present to focus less on ratings and numbers, and instead to aim to have a positive impact and to use their respective platforms for good.

Watch the clips below: