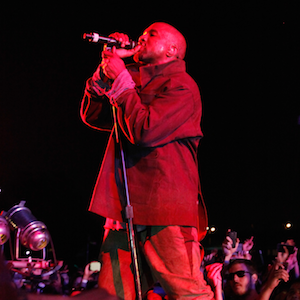 Kanye West on Sunday night closed out a Governors Ball with plenty of highs and lows. The weekend-long festival was shut down early on Friday due to torrential rains, which ended several musicians' sets throughout the day before completely canceling the event's first day. A muddy, messy, stressful weekend was capped by the most anticipated performance of them all: Kanye West. The polarizing MC, whose Yeezus arrives on June 18, performed previously heard tracks off the set, "Black Skinhead" and "New Slaves," in addition to new cuts "On Site," "I Am A God" and "Send It Up."

While much has been made about West's Yeezus title (some have called it blasphemous, among other things), the rapper clarified his viewpoint in "I Am A God": "I am a god/even though I'm a man of God/my whole life in the hands of God/so y'all better quit playin' with God."

Ye certainly displayed plenty of passion with his new material, but many fans commented on the much more negative vibe throughout the new songs. Despite mixed feelings, it remains to be seen how the response will translate in sales come June 18.

Watch his performances below: