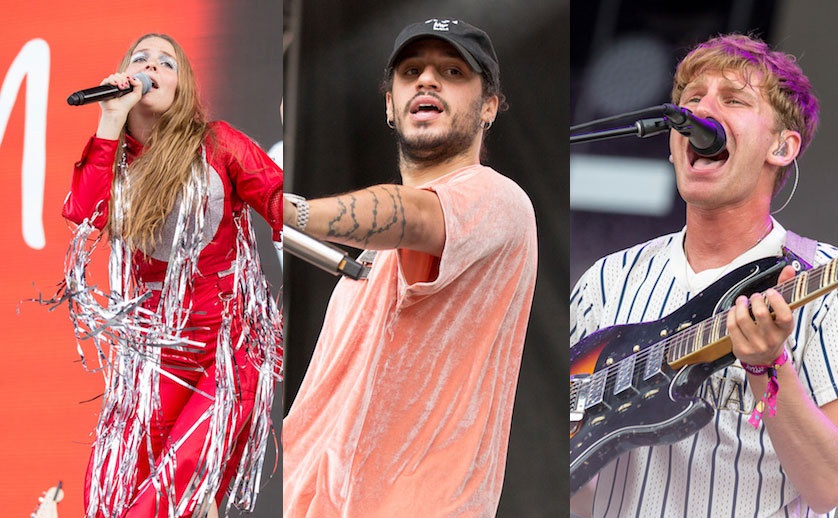 Despite a soggy start and somewhat of a relatively uneventful finish, the 2017 edition of Lollapalooza included a number of big, career-defining and perhaps star-launching performances.

One of the weekend's biggest highlights was most certainly Chance the Rapper's homecoming set on Saturday, surrounded by a sea of largely Chicago fans. But newcomers like Maggie Rogers, Russ and Jain also grabbed the spotlight with massive performances ensuring they'll likely be back to Grant Park in the future.

In addition to our daily highlights and recaps, we've compiled a list of our absolute favorite performances from throughout the four-day event. Below are 13 of the acts who seemed to shine just a bit brighter than the rest.

Sampha
He was among Variance's Must-See Acts of Lollla. And on Sunday afternoon, he proved exactly why, with a cozy performance on the Pepsi Stage, surrounded by a mix of adoring fans and many clearly discovering him for the first time and unable to resist the prowess of his soulful croon and inexplicable charm.

Maggie Rogers
The Maryland native, who is one of Variance's 2017 FutureSounds, has been having a banner year. But even she acknowledged there was something unique about being on the Grant Park stage, mere hours after Chance headlined there. It was a career benchmark for a star in the making, as she dazzled the audience with her own material (including breakout single "Alaska") while also revisiting her mesmerizing cover of Neil Young's "Harvest Moon," which is so perfect it needs to be on her debut album.

Hippo Campus
The Minnesota outfit didn't hold anything back, opening with a rousing, confident rendition of one of their best-known songs "Way It Goes." With a rowdy crowd in front of them, the band fed off the energy and delivered a blissful, summertime party of a performance. With a new album recently released a lengthy tour ahead of them, Hippo Campus has plenty to celebrate right now. And their Lolla set reflected that.

Russ
On the heels of releasing his debut album There's Really A Wolf, Russ seemed to be taking a victory lap, performing for a massive crowd, which spilled into the street, with many hardcore supporters climbing trees to get a glimpse of the young emcee. Hopping between fan favorites and charting singles, he had the audience in the palm of his hand from start to finish, a testament of his connection to his fans but also of his pure skill.

Glass Animals
In a music industry that is increasingly oversaturated with young bands and label-concocted acts, Glass Animals have held their own. They're weird, they're artsy, they're clever. But they put on a damn good show. And as evidenced during their Lolla set, they continue to get better. Frontman Dave Bayly is an absolute beast, flowing seamlessly between different instruments and into the crowd, never missing a beat.

Sylvan Esso
The North Carolina duo has been perhaps one of the most underrated live acts this festival season. But they consistently give a riveting show, and Lollapalooza was no exception. Vocalist Amelia Meath and producer-instrumentalist Nick Sanborn were clearly in sync for a set full of glossy pop cuts and fuzzy, danceable gems.

Blossoms
The British five-piece more than justified their recent Mercury Prize nomination for their self-titled debut with a fluttering, disco-y early afternoon set, winning over unsuspecting onlookers and rewarding devoted fans. While the group is relatively new, their jangly performance seemed earnest with an almost classic feel to it, like something you know you'll want to remember years from now.

BANKS
Two albums into her career, Jillian Banks strutted onto the Lake Shore stage with confidence, marking her Lolla return with a much more crisp sound and a more polished stage presence. Still gravitating to dark, eerie visuals, she managed to light up the stage with a courageous, sensually playful performance, proving she's not just a buzz act who will eventually fade into the background but a pop princess who's determined to be queen.

SAINt JHN
The Brooklyn rapper didn't let his early time slot hold him back, instead delivering a performance worthy of the late afternoon. Throughout his set, he was noticeably beaming with charisma and spitting verses like he was on the Bud Light main stage. It was easily one of the most underrated performances of the weekend.

Cage the Elephant
The Kentucky rockers are physically unable to put on a bad show, but they came ready for Lollapalooza, delivering a massive, headliner-worthy show just an hour before storms crashed into Grant Park. Matt Shultz donned a glitzy sequined dress, raging all over the stage and into the crowd as he slowly stripped down to his underwear. It was a high-octane moment many fans won't soon forget from a band which finally seems to be cresting.

Run the Jewels
Killer Mike and El-P could have easily coasted through their set, as they've cemented their status as festival staples over the past three summers. But they didn't come to play and that was evident throughout their pulsating, electric performance on the Grant Park stage. And between inviting a fan on stage to perform with them and later pausing to plead with fans who might be feeling suicidal ("We need you here," El-P declared), the set felt authentic. It felt human.

Jain
Following months of building buzz, the French singer embraced her big Lolla debut with a glistening, upbeat performance, turning the Tito's stage into a dance floor as she treated the audience to live renditions of her 2016 album Zanaka. With a lineup as exhaustive (and exhausting) at Lollapalooza's, it's sometimes easy for newcomers to get lost in the shuffle, but Jain was among the very few who certainly stood out.

Chance the Rapper
Even before his star-studded opening video, Chance the Rapper's Chicago homecoming performance was a big one, as fans crammed into every space of the grounds in front of the Grant Park stage, perhaps making for one of Lollapalooza's largest crowds ever. And Chance delivered a special show, thanking his city for having his back and reminding them he has theirs. While guest appearances from Vic Mensa and Francis and the Lights were welcome ones, this show was all about Chance and Chicago. And although it was truly an unforgettable night, it was also a reminder that Chance the Rapper is somehow still just getting started.

See photos from Lollapalooza 2017 below, by Dan DeSlover, unless otherwise noted.