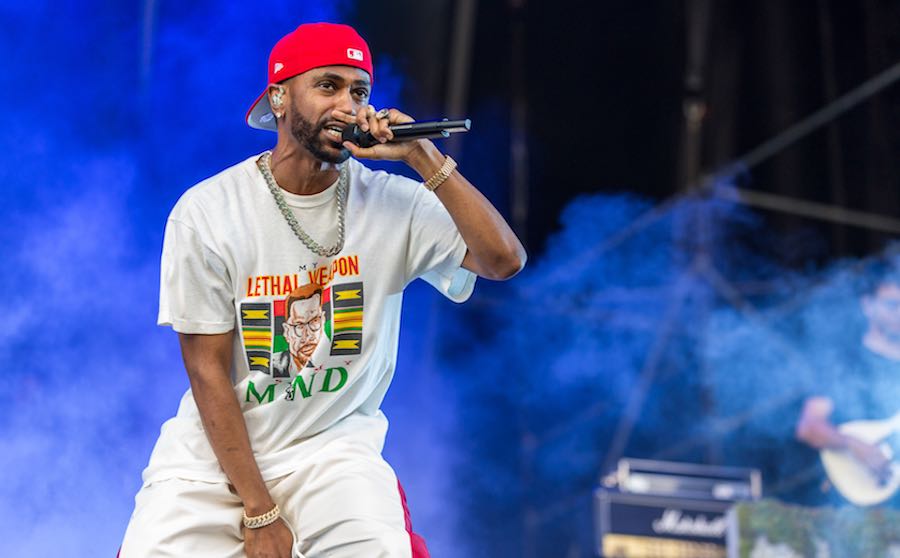 Photo of Big Sean performing at Lollapalooza 2017, by Dan DeSlover
—

Lollapalooza wrapped its fourth day on Sunday with a number of big performances, capping a rollercoaster weekend with a steady, mostly no-frills roster including Arcade Fire, Big Sean, London Grammar and Charli XCX.

As was the case throughout most of the weekend, newcomers and emerging stars really seemed to own their respective stages, with Barns Courtney and Carseat Head Rest delivering solid performances early in the day.

Later on, it was Maggie Rogers offering a stellar debut on the Grant Stage, the very same spot where Chance the Rapper closed out Saturday just hours before. Rogers treated the audience to a breezy, confident show, capped with her brilliant cover of Neil Young's "Harvest Moon," which has become a setlist staple, as well as the closer, her breakout single "Alaska."

Taking the Pepsi Stage just moments later was Noname, a Chicago native who has been having a massive year, and she gave her hometown a performance worthy of all the acclaim she's been receiving, practically glowing as she delivered her set.

Tove Lo and Charli XCX also gave reliably glossy performances, although they each seemed to be off a bit. More specifically, outside of her big debut of buzzworthy single "Boys" and a guest cameo from Halsey, Charli XCX's set was somewhat hollow, with the singer repeatedly pleading with the crowd to "make some fucking noise" essentially between every song.

Also lackluster was Lil Yachty, who arguably belonged on the Bud Light or Grant Park stage rather than the smaller, more confined space that is Tito's. Although he is mostly just looking to party, the tight space and poor audio didn't work in his favor. But fans seemed to be having a good time, so in that sense, it was a success.

Now Big Sean was on the Bud Light stage. And he relished in it, strutting from one end to another, climbing his elaborate set pieces and not so subtly flashing glimpses of his stomach and Calvin Klein waistband, which was acknowledged by a roar from the crowd, who then erupted even louder when Sean launched into "Dance (A$$)."

As the sun faded, Sampha offered the perfect escape from the building noise through Grant Park, nestled between the trees surrounding the Pepsi Stage, where fans laid on blankets, while others were drinking up and lighting up as they danced. In exchange for the crowd's receptiveness, the singer delivered a soulful performance, blended with lush beats and at times very danceable rhythms.

Bringing everything to a full stop, however, was Arcade Fire, fresh off the release of a newly No. 1 album. Albeit with a crowd much smaller than Chance's the night before, they took the stage like complete pros, effortlessly flowing from new material to old favorites, as Win Butler paused between songs to tell the Chicago crowd, "I still believe in this country," then nodding to Donald Trump by saying, "We've seen this bullshit before."

While politics during musical performances are certainly a gamble, the moment instead seemed to be a unifying one, as if to rally the crowd and remind us we're all in this together, especially as the headlines continue to grow darker in the hours and days since the band's performance.

See photos from Day 4 of Lolla below and follow our coverage here. All photos by Dan DeSlover, unless otherwise noted.