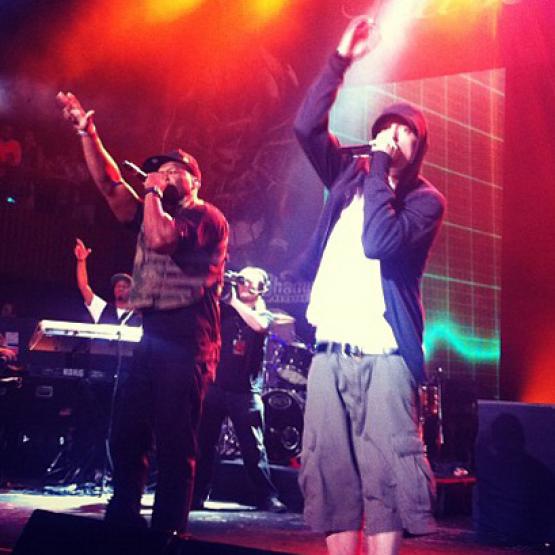 Nine years ago, 50 Cent burst into mainstream hip-hop -- with the help of co-executive producer Eminem -- on his proper debut, Get Rich or Die Tryin'.

Fast forward to Friday night (March 16), when 50 Cent revisited the successful album with an anniversary concert, 'Shady 2.0,' at SXSW. At 11 p.m. 50 Cent walked onto the stage of Austin Music Hall wearing a camouflage bulletproof vest, reminiscent of 50's persona circa '03.

About mid-show, Eminem--rumored to make an appearance from the moment the concert was announced-- indeed joined 50 on stage. Both rhymed to "Patiently Waiting" alongside each other, and later closed the show together with 50's freestyle, "Till I Collapse," "Don't Push Me" -- sans Lloyd Banks -- and Eminem's own "Crack a Bottle."

"We out of here," Eminem shouted after thanking those in attendance.