Tyson Ritter Talks New Role on 'Parenthood,' Growing Up & What Comes Next 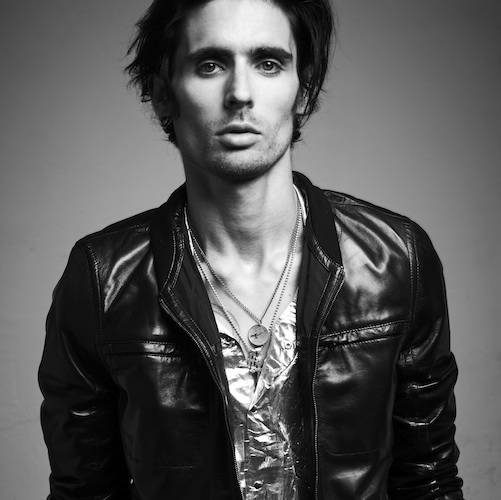 **Editor's note: A version of this story first appeared in the new issue of Variance. Click here for the full issue.

“I was always the kid who just wanted to be on stage. It only took me a guitar and a couple good songs to get me up there,” says The All-American Rejects frontman Tyson Ritter, who’s tackling a new recurring role this season on NBC’s Parenthood.

After performing for more than a decade, the veteran singer has redirected his energy to an alternate creative outlet. Appearing on the comedy-drama television series, Parenthood, Ritter plays a similar role to the one he’s been living since the start of his band in 1999. His character goes by the name Oliver Rome and is also the lead singer of a rock band.

“I said, ‘Look, Monday through Friday, I can only stay in my basement so long, writing songs,’” admits Ritter. “‘It would be nice to kind of stretch another part of my left brain here.’”

The acting world is becoming a second home to Ritter, and while he admits that the competition is stiff, his performance history gives him an advantage. Being in front of thousands of people helped prepare him for an audition atmosphere, leaving nerves out of the picture.

“Everybody that goes on auditions here, they want it more than anything in the world. And me, when I go out on [auditions], of course I want it, but I'm having fun. People can have a really good sense of somebody who's giving an audition, and they're giving a hint of desperation in the back of their performance,” he explains. “You put out good energy, and good things come to you.”

Not only does Ritter have the opportunity to test out his acting abilities with Parenthood, but he is also given the chance to show his fans a side of him they couldn’t fully comprehend previously.

“I want to show people that I'm not just some crazy asshole on a stage," he states. “I really think I've been pretending to be somebody I am not on stage for the last 12 years. Everybody that has ever come to a show thinks, ‘Man, what’s he on? He's crazy.’”

This rock star persona, however, is channeled into his character’s role as Ritter is able to take into account his own experiences with the music industry and convey that in his work. Oliver Rome and Tyson Ritter begin to blend on camera.

“Maybe it's a reincarnation of myself when I feel like I'm taking pieces of my experience. It reminds me a lot of when we were first starting, but this kid Oliver, he's kind of got a big ego,” he says, pointing out the distinction between the two. “That's the only difference: I think this kid is way too big for his britches.”

The acting world has been good to Ritter both on- and off-screen. Adding another new chapter to his life is actress and bride-to-be, Elena Satine. The two are engaged to be married and Ritter has no problem admitting that he’s “settling down.” He expresses that he is more creative than ever, but with a newfound perspective on life outside of unrequited love. The broken-hearted boy in his 20s is now a ghost. He has found more substance in life and is ready to let go of the past.

“Six months ago I crashed my touring van, which I've toured with since I was 16,” Ritter recalls. “It's funny how much symbolism I wrapped up into that van that finally died.”

Ritter had no choice but to move on to a new perspective—and a new vehicle. He explains the process: “I think now it's just ‘what's next?’ It's not like I'm at that adult stage. It's just like outgrowing a pair of shoes, a pair of really tight shoes, and putting a pair of really comfortable shoes on.”

He’s experienced a lot of personal growth on the path he took to get to the present. And while his reputation has had its highs and lows, it’s clear that he’s found a context for his experiences.

“I didn't learn as much about life as I did after I had graduated high school. You know, they teach you everything in school about how to get ready for life, but I learned so much more from 17 to 25 than I could have in my entire life [before that]. I was just going through the music business, watching every carnation of social media explode, and having a little bit of fun in my mid-20s,” he explains.

“Everybody has a different up-and-coming. … I guess there are exceptions to the rule, but for the most part, half the people that I know in their mid-30s out here in L.A. party harder than I ever did in when I was 20.”

Ritter is comfortable with himself in the best way imaginable. The All-American Rejects can tour at will, he is embarking on a new career journey and is ready to be a husband. His priorities are lined up with his new lifestyle, and he is living for more than just the music.

Ultimately, his longtime music fans have nothing to fear, as Ritter hints at future music endeavors. “I'm completely invigorated and re-inspired in every facet of life. It's been about a year-and-a-half since I put my last record out. So I guess it's about time to start fishing for hooks.”