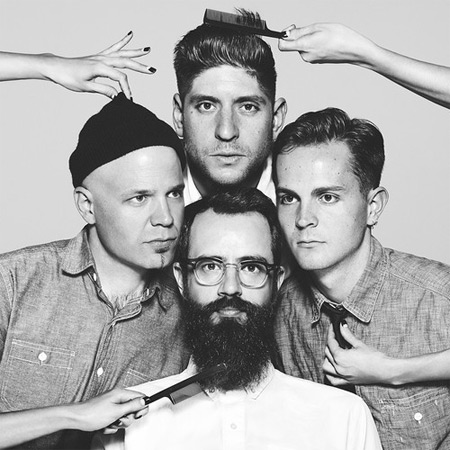 With the brand new Kingdom Phylum EP out last week, funk-rock outfit Spirit Animal is on an upward trend. The foursome comprised of Steve Cooper, Ronen Evron, Paul Michel and Cal Stamp is evidently influenced by the Red Hot Chili Peppers, with an indisputable grit and grime to its sound. But the group is hardly just another rock act.

Having received praise earlier this year from MTV’s Buzzworthy for its newest single, “Black Jack White,” the Brooklyn-based quartet stays true to its rock roots, with heavy riffs and throbbing bass, but just as important as the “rock” is the “roll,” according to frontman Cooper, who is intent on putting more focus on what he calls “the party part” of rock and roll.

Although Spirit Animal might not exactly make for good playlist mates with the likes of Calvin Harris or Katy Perry, there’s no denying the band’s music is just as danceable and pop-friendly. And as Cooper sees it, it’s one of the positive elements of music in its current state.

“I love the fact that you can have a funk song that’s a dance song and a rock song that’s a pop song,” he explains. “The traditional labels of the past don’t apply. You can have music that plays to the rock crowds and also on the dance floor. I think that’s incredible, and that’s what we’re about.”

While he’s careful to express allegiance to the tried-and-true sounds of rock and roll, he believes that most music of today stems from those same roots. “Ultimately, when you look at so many of the songs we love and songs that have resonated over the years, you find rock and roll,” says Cooper, who counts HAIM, Poliça and Queens of the Stone Age among his current favorites. “What it’s really all about is, it’s about gathering around a song and connecting. And we take that to heart with the music we make.”

As the lines in music continue to blur and bands are not as easily pigeonholed into one category or another, Cooper credits the current generation of music listeners for spearheading the newfound synergy among genres.

“I remember being in high school and most of my friends or classmates were usually very particular to one style of music,” he recalls, as would many 20- and 30-somethings. “I remember having friends that would say, ‘Oh, I don’t like rap’ or ‘I only listen to this type of rock.’ Now, people like it all. And that’s a wonderful thing. It gives like us the freedom to make the music we like. And, hey, if other people enjoy it, even better.”

Spirit Animal is currently on the road promoting Kingdom Phylum, with plans to release additional music—including a full-length album—in the near future. Get the new EP here.