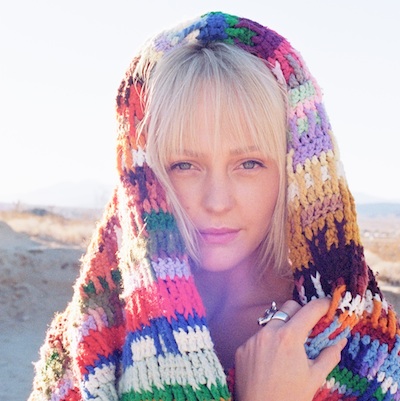 In the average teenage girl’s life, high school years are spent thinking about prom and SAT’s or ACT’s, college, and most of all, boyfriends. But for British-born Laura Marling, her life was anything but average.

“My father was a musician and I left school when I was 16 and that was it,” says Marling. “That’s what I was doing... My dad runs a recording studio. It wasn’t so alien to my parents that I might go off and become a musician. My dad had taught me guitar. I’m not good at anything else so I was quite lucky.”

At 16, Marling left her nervous but supportive parents behind and set out for London to chase her dreams.

“I was quite a sensible 16-year-old,” Marling says. “I don’t think I was in danger of going off the rails. I joined a band. I was singing background vocals in a band that was touring and I loved it. I loved every minute of it. I was lucky. I fell in with a nice crowd. It wasn’t scary or dark, really.”

Was it luck or was it just the inevitable rise of a talented young girl? With four albums under her belt (the most recent having released in May), Marling, who is now in her 20s, speaks with a confidence and a wisdom that is beyond her years.

For example, in the past five years and with the release of her albums, Marling says that she’s learned that instinct is best.

“Whatever your instinct is, it’s usually right. And remember that even though it’s difficult, sometimes you don’t always have to do what people want you to do,” she says. “You have to find a balance between being difficult and following your instinct.”

Perhaps it was instinct that led Marling out of the U.K. and brought her to L.A. less than a year ago. Marling says that she had lived in London since she was 16 and needed a change of scene.

“It was time to go.” The decision to relocate was more personal than anything else, she says.

“It was nothing really to do with my career,” says Marling. “I have a couple of friends who lived out there and out east. It’s more of a place to relax than it is to work, that’s for sure.”

“I like it very well,” she says. “I mean, obviously, it’s nice cause of the weather, but you know, last week I drove down from Portland all the way to L.A. and it was beautiful.”

But Marling says even though she misses Europe, she loves where she lives now and she cannot compare L.A. to the U.K. “They are two completely different lifestyles.”

While she could not compare physical locations, she had no problem comparing U.K. and L.A. audiences.

“They’re very, very different,” she says. “American audiences are very warm and they have a lot of energy, which is nice if you keep the show going. English audiences are very, they’re not cold by any means, but they’re very subdued. They’re more willing to be subdued than they are to be over excitable... It’s either high energy or relaxing flow energy so it’s just makes a different show.”