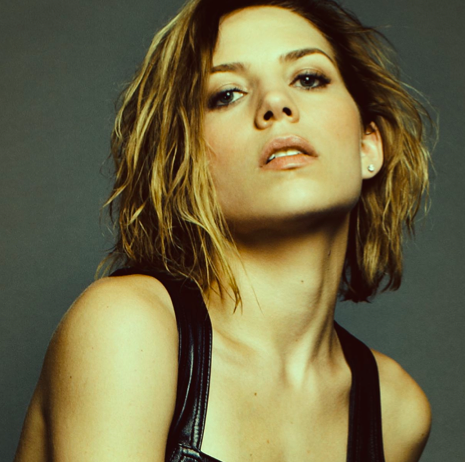 She’s certainly no stranger to the music industry. She’s written hits for Eminem, Rihanna, Christina Aguilera, T.I., Zedd and others. She’s been featured on popular tracks such as “I Need a Doctor” with Dr. Dre and Eminem, “Words I Never Said” with Lupe Fiasco, and “Coming Home” with Diddy-Dirty Money, a song she co-wrote with the likes of Jermaine Cole and JAY Z. Yet Skylar Grey is only now receiving her proper introduction to the world, her debut album, Don’t Look Down, having released this month.

It seems as if fans have been waiting forever for this record, which has been teased since about the time of her 2011 GRAMMY performance with Dr. Dre and Eminem. But Grey, acknowledging the relief of finally releasing the project, believes the wait has been worth it.

“It does seem like it’s been a while,” she admits. “But it was important to get it right. I think I was nervous—that’s part of it. I’m a perfectionist, like a lot of artists, and you just overthink and overanalyze everything. Every song, every lyric, the title. But I’m ready just to have it out there, and out of my hands.”

Part of the challenge facing Grey, born Holly Brook Hafermann, rests in her identity. She has previously released music—albeit mostly under the radar—as Holly Brook, and she and her mother performed as a folk duo called Generations. Despite eventually signing to Linkin Park’s Machine Shop Records, her career stalled until 2006’s “Where’d You Go,” a collaboration with Fort Minor, the side project of Linkin Park frontman Mike Shinoda. Since then, Grey has eased her way into the hip-hop scene, her name now being associated with some of rap’s greatest MCs.

She’s played folk, jazz, hip-hop and just about everything in between. But with all that experience and such a wide range of influences, defining Skylar Grey and wrapping it all into one perfect commercial record has been no small task. “The hard part is you’re putting out a debut album at 27 years old,” the singer explains. “I kind of knew what I wanted to do, but I’m not just a fresh, young pop star. I definitely didn’t want to be one of those artists who puts out an album of bubblegum pop at 27, and then what do you do for the second record? You’re 30 by then. It just doesn’t work. I didn’t want that to be me. And it can be kind of overwhelming trying to figure out how you’re going to present yourself.”

Although Grey was still working out the details for the record earlier this year, some of the material has already been brewing for a long time. In fact, “Final Warning” was written at the same time as her mammoth songwriting hit, “Love the Way You Lie.” Grey had secluded herself in a cabin in Oregon, escaping a battle with her label and a bitter relationship. She began pouring a very raw flux of emotions into wrathful lyrics that eventually became two murderous tracks. The young songwriter would soon learn a very valuable lesson that she took with her into this new record.

“‘Love the Way You Lie’ opened my eyes in many ways,” she recalls. “Suddenly I was getting calls from every direction. These people are expecting you to create a hit for them. Your name is linked to that song, and everyone thinks you can duplicate that for them, like magic. It was frustrating at times. I walked out of sessions because they didn’t get it. That song came from a very real place for me. I had no idea it would be the song that it is now.”

On the other hand, the experience has likely prepared her for this moment, when she is not only the songwriter but the performer. “It helps keep me balanced,” says Grey. “Because I know that not every song is going to explode. I’m not expecting overnight success. I understand that this is just a step in the right direction.”

It certainly doesn’t hurt that she’s got one of the most powerful names in music backing her emphatically as she launches her solo project. Not only has Eminem brought Grey in to work on his own music, but he lent his vocals to her record, which is also executively produced by the rapper.

“It’s still kind of hard to believe,” says Grey about Eminem’s decision to take such an active role behind-the-scenes in Don’t Look Down. “I have so much respect for him as an artist and a producer. It’s definitely a boost to my confidence having his support and getting his feedback. It can be scary being the new artist trying to step out and do this, but it’s very affirming to know he has my back.”

While Eminem’s involvement is a sure sign of validation for any artist, Grey still remembers being in disbelief the first time he complimented her music. “It completely caught me by surprise,” she recalls. “He told me my stuff was ‘fucking amazing.’ I was just like, I cannot believe this. He’s fucking Eminem. To hear him say that—to hear him say anything at all about my music—was just weird and crazy.”

On the surface, the combination of Eminem and Grey might seem “weird and crazy” to some, but at their core, the two artists are more alike than not. Their music reflects their life in very raw, uncensored ways. Although different in style, they both pull on heartbreaking experiences to create gut-wrenching art that is impossible to ignore.

Of course, it remains to be seen the long-term effects of Grey’s latest body of work, and after a series of delays, she admits “it’s impossible to predict when the ‘right moment’ is.” But perhaps this stage of her career is less about getting the timing right and more about showcasing her true talent. Appropriately named Don’t Look Down, the album is the singer’s opportunity to finally jump into the spotlight unabashedly.

“When you put so much of who you are into an album, part of you worries about how people will respond,” she confesses. “Sometimes it’s hard to let go. It’s scary and exciting—but mostly exciting. I can definitely say I’m ready.”