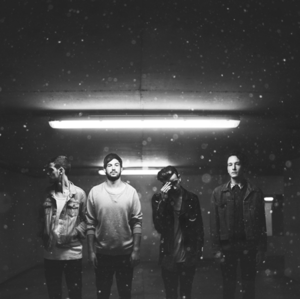 Manchester-based art-pop quartet The 1975 are quickly climbing the charts across the United States and Britain. After a string of sold-out performances, the foursome will release their self-titled debut record this fall, followed by a North American headlining tour. Vocalist-guitarist Matthew Healy took time between tour stops to talk with Variance.

How did the band form?
Through a reaction to boredom to be honest with you. Just me and my mates, we started playing in punk bands when we were about 13 and we've never left each other's side since then really, so we've been together for about 10 years.

How has your sound evolved since you first started playing?
It's manifested itself in lots of different ways. We've gone from being a loud kind of skate, punk band to almost like an ‘80s pop project. We wanted our records to feel like a John Hughes movie soundtrack.

Why did you all decide to release so many EPs before doing a debut full-length?
First of all, we didn't really feel the need to put out any music. We weren't that desperate for kind of any validation. We were very happy just playing music as a pursuit of excellence amongst four individuals. I suppose when we decided we were going to do it, we wanted people to really love our band as much as we love it. I think in order to acquire that you need a certain amount of material. We wanted to put out records that were all bodies of work that kind of said something about who we were, so people could make an emotional investment. The more you know about somebody, the more you invest in the relationship, the more rewarding it is for both of you, so that’s the way we thought about it.

You mentioned how you guys had a lot of different name changes. Why did "The 1975" stick with you all?
It was a time where we'd been tarnished a bit. Not tarnished, but we'd been around major labels that showed a lot of interest and we ended up not getting signed to a major label and it wasn't really disheartening, it just revitalized us and we realized what we wanted. We just thought it summed us up at the time, we didn't really know our own identity.

Where did your love of John Hughes films come about? Do you have a favorite?
That’s what I was brought up on really, what I would watch. I used to be obsessed with Pretty In Pink and Weird Science, Breakfast Club and all those kinds of movies. It's not necessarily stylistically something that we've tried to parallel. We've not tried to make an 80’s sounding record, but it's the way those records make you feel. It's that kind of nostalgic, kind of life-affirming, not overly romantic vibe that those movies have and it's something we wanted to capture in our record.

Why do you think touring is so important for up-and-coming bands?
‘Cause you need to be really good live. It's all very well being stylistically cool or clever or having a concrete vision, but if you can't portray that to 150 fellow human beings in a room with no kind of cloaks and no kind of smoke and mirrors, then you're not going to sustain, you know? So, I just think you've gotta tour. You owe it to the people who enjoy your music.