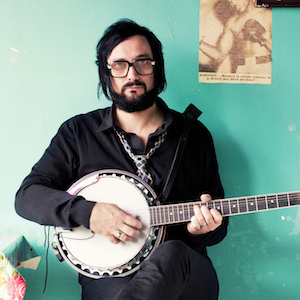 In a new interview with Variance, the extremely talented Sigmond discusses the challenges he's faced, his thoughts on his upcoming SXSW debut and the advice that has brought him to this point in his career.

Heavy Flowers is out now via Krian Music Group. For tickets and more information on Blaudzun, go to his website.

What was the hardest part about putting Heavy Flowers together?

Most of the time when I write, I write all year—when I'm on tour and when I'm at home. I had gone to the studio over the summer and we decided not to work on it for 2-3 weeks, and that was a bad decision, because I went to France and the moment I stepped out of the car, these ideas came to me and I had no way to record them. I realized I shouldn't have taken a break. It was an awkward moment, but maybe it's a good thing.

You've said the writing process is a constant state of mind. You can't just flip a switch and sit down and write?

Yes, definitely, I can do that. But you have to schedule it. It's almost like when you work at an office and you start at 10 and then you stop at 5 or 6, and you call it a day. I definitely can do that, but in the process of getting new ideas and capturing melodies, that's something I can do on the road, but there has to be some hard labor too. There have to be long days and long hours devoted to it.

You're going to be at SXSW. What are you looking forward to most?

I haven't been to Austin. I've heard good stories about it. Last October, I did my first U.S. gig at the CMJ Festival. For me, to play is a great thing to do, and it actually doesn't matter if that's in the U.S. or elsewhere. But because SXSW is such a huge showcase festival, [and] very exciting bands are playing there, it has to be special. I do know that. But I have no real expectations. I know the experience will be great.

Your album is amazing—heartfelt, very genuine and ambitious. It pulls from so many genres and styles. Who else are you listening to, personally?

I'm really into lots of different styles of music. I grew up listening to Bob Dylan and Johnny Cash, but I'm a huge David Bowie fan also. I love [Bruce] Springsteen. But I've also been listening to the King of Rock album by Run-D.M.C. It doesn't really matter. Good music comes in lots of different styles. Also in the classical world, and lots of Spanish and Portuguese folk musicals. So it depends on my mood. I also just discovered—the whole world did I suppose—that documentary Searching For Sugar Man. It's great.

In your career so far, what is some of the best advice that you feel has gotten you to this point?

Best advice? Before this third album, I did lots of different projects and lots of different alternative rock bands. I think the best advice anyone ever gave me was to do your own thing and don't compromise. That's also the reason that I quit those bands, and I started to concentrate on my own songs. Just me and the guitar. It slowly evolved, and I usually bring six or seven musicians with me. In the end, it's a band when I perform live. But it's about not compromising your ideas, and if you're into your own songs, there just must be someone else who feels the same way. I don't know how big an audience, but if you like it, there have to be other people who do.

Debuting in the U.S. introduces you to a new audience. What's one thing you hope to accomplish crossing into the States?

It's good to get to know new audiences, and to get out there, but singing and making music is the best to do. When you sing and when you play, it gives you a kind of comfort in the darker periods of your life. That's the main reason I do what I do, is to achieve that level of consolation. I just love making music, and I love being able to share that with others.