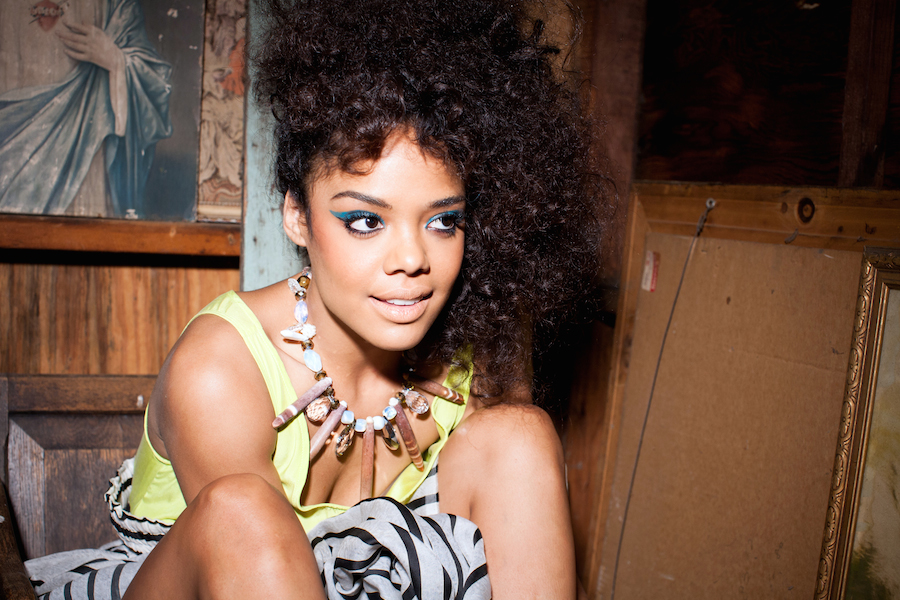 Big things are happening for Los Angeles-born actress and songstress Tessa Thompson. And it doesn’t appear things are slowing down anytime soon.

Thompson stars in the buzzing satirical film, Dear White People, perhaps one of the most important films of the fall. It first premiered at this year’s Sundance Film Festival before receiving a theatrical release in October. The title naturally sparks curiosity, but the film itself actually ignites deeper conversation.

“I think it’s been provocative for people—and I think purposely so,” admits Thompson, speaking with Variance ahead of the wide release. “But it seems to be a film that, even before people have seen it, they want to talk about it and are developing opinions about it. So I’m also curious to see the types of conversations being had and what sparks culturally.”

Taking on a project like this, Thompson anticipated the different reactions the film would inspire from viewers. Whether it stirs up seriously eye-opening or affably-awkward emotions, Dear White People was clearly meant to spotlight some cultural afflictions.

In a year when one of the biggest headlines—the death of Michael Brown in Ferguson, Missouri—has sparked intense discussion about American race relations 50 years after the Civil Rights Act of 1964, a film like this seems rather timely.

But Thompson makes it clear the film doesn’t assume to be the answer to America's race issues, stating: “It's not medicine.”

“It’s a really fun, light-hearted movie,” she explains. “But I hope what it does for audiences is that they’ve been enjoying this ride and then at the end, they have some space to think about the things the film has presented. And that’s why it’s kind of great to use satire to talk about these issues.

“I think if we can continue to make content that doesn’t beat up an audience but lets them know, whether you’re someone who feels marginalized—which happens to people of color—or whether you’re not and you don’t know how to navigate this new space we’re in where we want to be more lighthearted about race, past political correctness, it’s all OK. And I think the movie speaks to both sides.”

When Thompson first read the script, she felt as though her younger years might have been a different story had she seen a movie like this as a teen. And she hopes it's able to do just that for someone else.

“I think like a lot of younger people, you go through periods of questioning your identity and who you want to be,” she says. “And sometimes race just complicates that, especially if you’re the only one like you in a particular place. But more than a conversation about just race, the movie is about identity.

“The thing that struck me—the reason I wanted to be part of it—was the script had such a clear vision,” recalls Thompson. “It’s a multi-protagonist movie and, in that sense, it doesn’t really give you a lot of answers; it just poses a lot of questions in a lot of different ways. And no one’s completely right or wrong. It’s really a movie about ideas.”

Thompson credits the film’s writer and director Justin Simien for delivering a project that effortlessly balances such important topics with intelligence and authenticity.

“I think his voice comes through so well,” she says. “So it’s not surprising the attention the film’s getting. I think a lot of that has to do with Justin.”

Because the film first premiered at Sundance, Thompson was able to engage with the audience and get direct feedback. But she is most excited to see what the rest of America takes away from the movie.

“We can fight,” says Thompson. “But if we’re both fighting for humanity and community, we’ll be alright. Even though we don’t always agree...I think these issues are really relevant, and we’re not in a place yet where we’re beyond talking about them.”

Adding to her current successes with film, Thompson's band Caught a Ghost is also progressing. She spent part of the year touring with the group and performing songs like “Sleeping at Night,” which is featured in the Dear White People soundtrack.

“Sometimes I’m making audition tapes in—I kid you not—in tiny bathroom stalls before or after soundcheck,” she says of balancing her film and music ventures.” But that balance is interesting to me. And the band has been really supportive and excited for me. They help me make my audition tapes.”

Thompson is also looking forward to the release of Selma, which is due in January and is already seeing the Oscar buzz. Based on the Voting Rights Act of 1965, it’s another incredible benchmark for the actress, but it’s also proof she wants to work on “things that matter.”

“There’s a part of me that only wants to work on projects that feel that tug on me in that way,” she states. “Frankly, that might mean working less, because those projects don’t come along all the time. But I think when they do, it’s right and Selma felt like that too.”

Ultimately, Thompson's talent is more than a series of career moves; she represents a voice that conveys truth and she sees the bigger picture when it comes to entertainment, which should help her as she continues on this journey, of which Dear White People is a very important chapter.

“I think films do have the potential to create positive change if we are responsible with the technology and what we take in,” she states. “We’re living in a very unpredictable time, but I think a lot of good can happen because of it.”